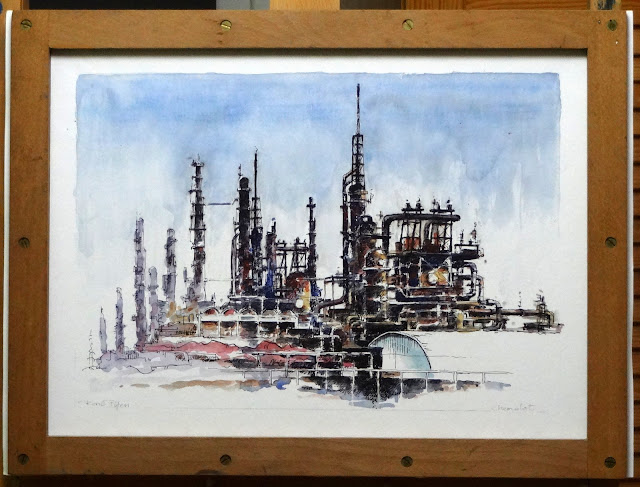 Ton van der Velden, one of the directors of Tebodin (the engineering company I work for), went into retirement last week. I was honoured to be asked to make this farewell present: a drawing of the Chemelot ACN plant in Geleen.
The last 15 years Ton was responsible for the international growth of our company in Eastern Europe, the middle east and south east Asia, but in the 90's he was director of Tebodin Maastricht. During that time this was one of the projects he worked on.
I handed the drawing over to Ton last thursday evening in our main office in The Hague; we had a good party afterwards. I really hope this drawing will be a token of our gratitude for everything he did for Tebodin.

Some of you may recall an earlier version of this drawing, made 3 months ago. Unfortunately that drawing was made in a sketchbook, so I couldn't tear it out. As the subject was so fitting for Ton's present, I remade the drawing (again on location) on decent paper 2 weeks ago.
The drawings was fitted in a nice frame 45x55cm, but I forgot to make a picture of that.
Posted by Rene Fijten at 18:10 13 comments: 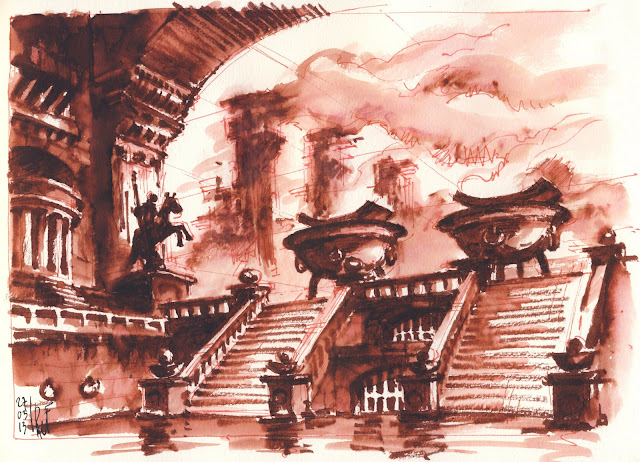 Always loved Piranesi's work (1720-1778); I like his drawings even more than his etchings. Especially the "Carceri d'invenzione" series.
So I was thrilled to be able to visit the Piranesi exhibition in London (in the sir John Soane museum). As far as I am concerned, the highlight of the exhibition was a fantastic drawing of an architectural fantasy, consisting only of red chalk lines and brown ink. It inspired me to make this fantasy in the same style. My own carceri d'invenzione.
Posted by Rene Fijten at 22:32 4 comments:

Email ThisBlogThis!Share to TwitterShare to FacebookShare to Pinterest
Labels: Art 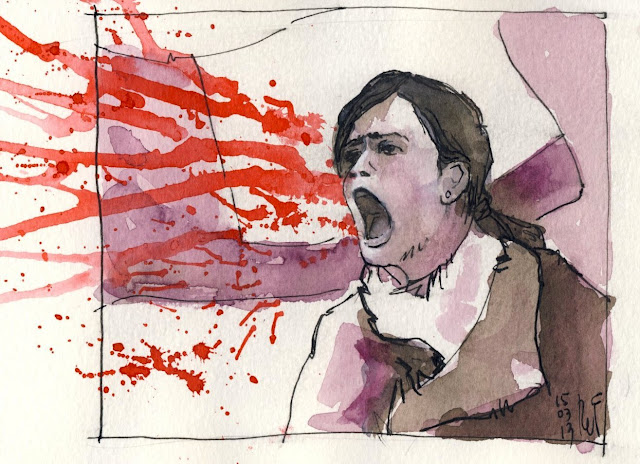 March 15, 2013. Another drawing in the Timeline series (I pick a newspicture every 15th of the month, I hope in december all these images together will tell something of 2013).
This is a young woman in Sofia protesting against the Bulgarian government after a man called  Dimitrov burnt himself as protest against corruption and unemployment. Original photo by Valentina Petrova.
Posted by Rene Fijten at 20:48 2 comments:

Email ThisBlogThis!Share to TwitterShare to FacebookShare to Pinterest
Labels: Timeline 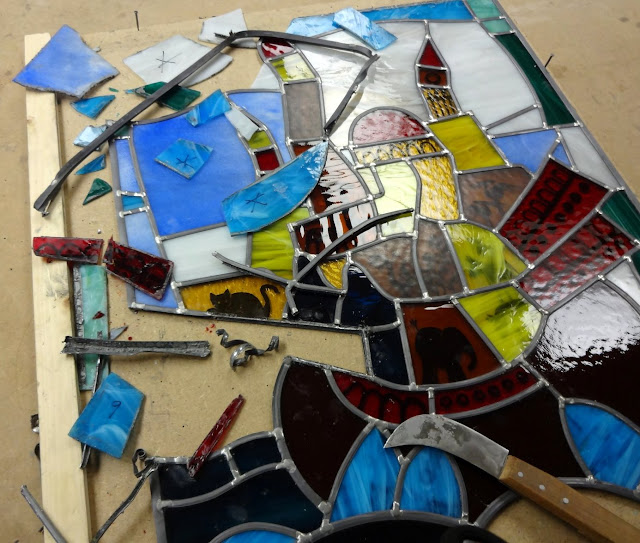 This is what happens when my wife drops my stained glass window. This used to be "Babels Ark" (see: http://www.renefijten.blogspot.nl/2012/11/babels-ark.html).
Repairing this glasspiece is even more painstaking than making a new one. But let look on the bright side: I am now becoming a restoration expert on stained glassed windows!
Posted by Rene Fijten at 20:27 1 comment: 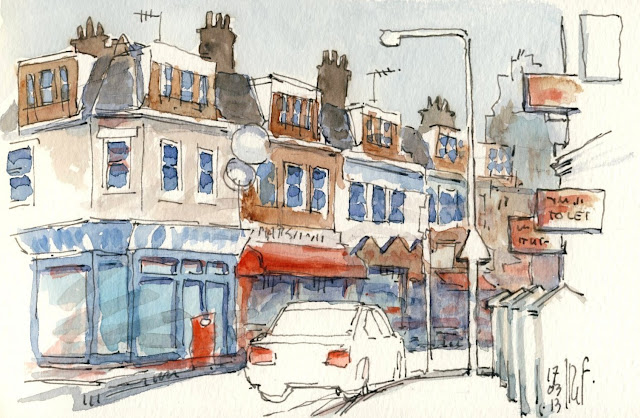 This is Albion road in Stoke Newington, one of the London suburbs.
It's the part of town where my daughter Rianne lives presently. I was waiting there for the night bus N73, in order to return home.
In my eyes it's a typical London suburban street, with rows of small colourful shops mostly run by Pakistan, Turkish or Chinese shopkeepers. London must be one of the most multicultural cities I've ever visited.
Posted by Rene Fijten at 21:30 2 comments: 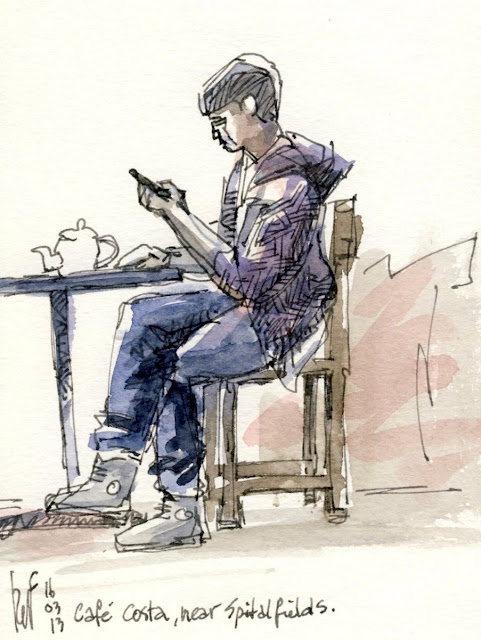 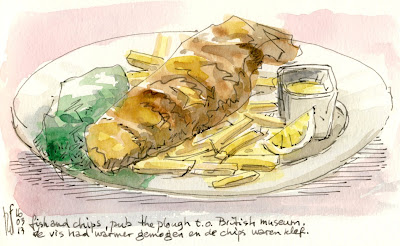 I made a short visit to London, to visit my daughter, the Sir John Soane museum and the Egyptian part of British museum.
I flew yesterday morning as early as 7 a.m., and returned to Maastricht his morning at 9.30 a.m.

Above a sketch I made in a café Costa, near Spitalfields.
Here an impression of the fish and chips luch, that we took at a local pub near the British museum. The F&C were not that good, not warm enough, and quite expensive. But it filled well.
Posted by Rene Fijten at 21:45 5 comments:

Palmtree in the snow 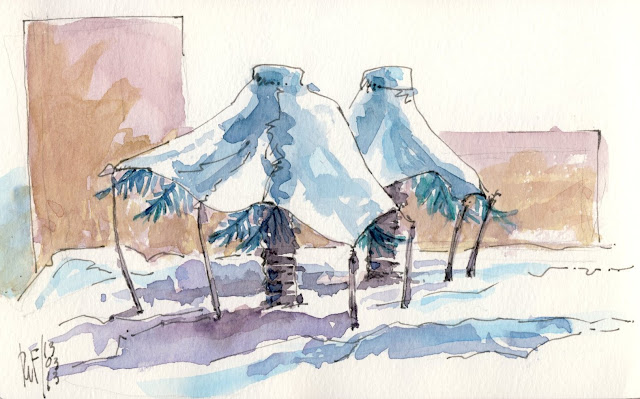 Palmtrees in the middle of winter!
I noticed these two palmtrees today, standing in the front lawn of the neighbour of our veterinarian (Provinciale weg, Oirsbeek).
They were located under a plastic sheet, held together with wires, to protect them against snow and cold.
Standing as a symbol of our longing for warmer days.
Posted by Rene Fijten at 19:23 No comments: 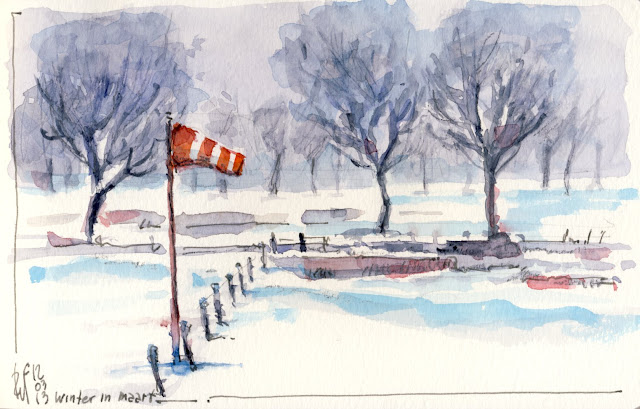 What can I say. I hate this winter. I made this sketch this afternoon, during lunchbreak, looking out from my office window over a fresh layer of 15 cm of snow.
I mean: it's already halfway March, I should be doing the first chores in my garden by now. Instead I am clearing snow from the pavement in front of my house. Grmmmmpfff.
Posted by Rene Fijten at 22:49 4 comments: 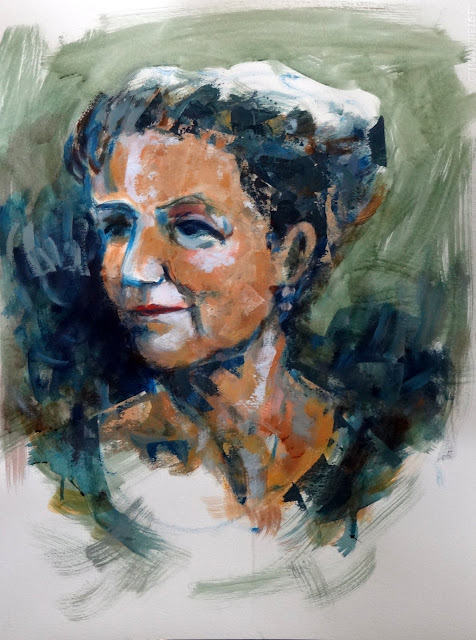 This time I think it went better with the portrait session.
Last Saturday during art class we had to try again with this 4-stage exercise.
First draw the lines directly with paint, then block in the values with transparent strokes.
Below you see how this looked like after these 2 stages (the image shows the (very patient) model Marlies).
Contrary to earlier paintings I wanted to have a dark background, to enhance the profile of the face.
Even tough I don't think it was all that bad, please keep in mind that pure resemblance was not the issue.
I also wanted to use green (terra verte) as background, as this is the complimentary colour to some flesh colours and red.
As a matter of fact, this exercise was planned to last 2 sessions, but I had to do this in only one (total two hours), so I had to work very fast. As a side effect the overlapping transparent strokes mixed with the not yet dried up ones, which unfortunately gave a muddy effect, not what I wanted. 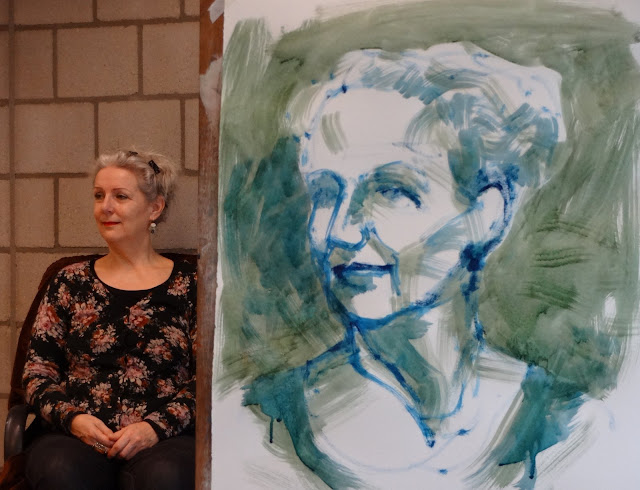 Then stage 3: painting smaller strokes with non-transparent paint.
By the way, I used acrylic paint (W&N's Galleria paint on 300 grams Steinbach paper 60x70cm)
Now I kicked in the colours, trying to work with smaller and better defined strokes towards the centre of the face. But always trying to keep something of the first 2 stages and the paper visible.
At some point I had to add white paint highlights again, on the picture below it looks harsher than in reality (I have not yet mastered making pictures which represent the colours decently).
Still, wisely using white is something I have to learn to improve on.
Halfway this process the model left, and we had to work "blind". That was done on purpose, as we should concentrate on making a good painting. Like I said before, resemblance was not quite the issue.
The result is the picture below, just before I went to stage 4. 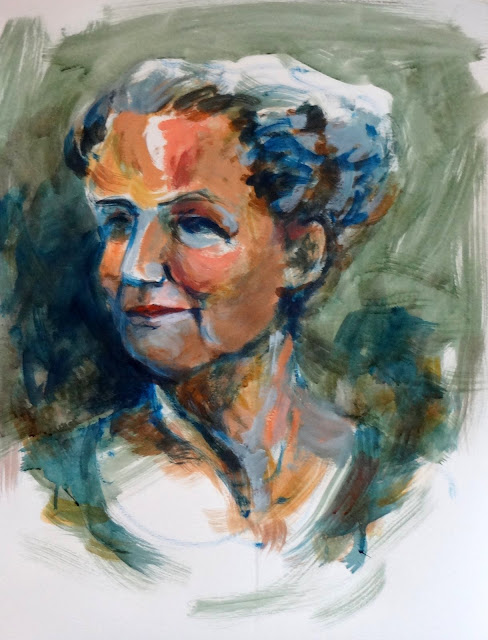 Stage 4 meant adding strokes and details with palette knife.
Now that's really difficult. Imagine, you have already spent a lot of time adding colours and textures, keeping the total painting in balance and the face recognizable in ever more subtle tones, and then you have to attack it again with the coarse and blunt palette knife.
It's were I went wrong last time.

So I tried to mix my colours with precision, and add them with restraint.

At each stroke I considered the added value, with as guiding principle that it should add and enhance the liveliness, but should never overshout the already painted parts.

Each stroke took a lot of time.


The fist image of this post shows the final result.
I should do this more often, but should also take more time than the two hours it took me to do this painting.
Posted by Rene Fijten at 14:16 3 comments:

I should have stopped earlier 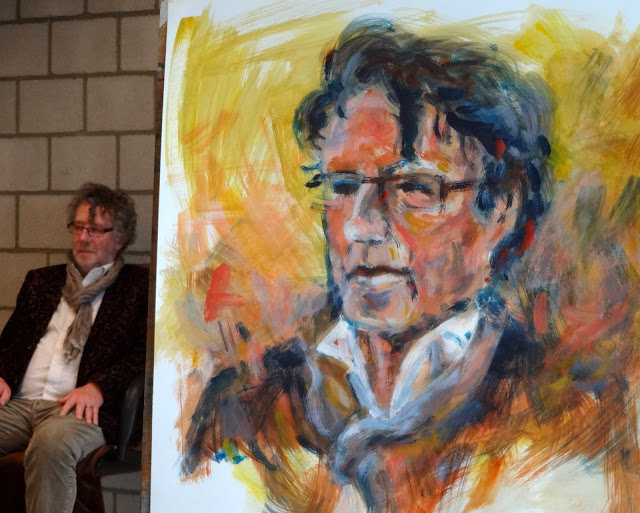 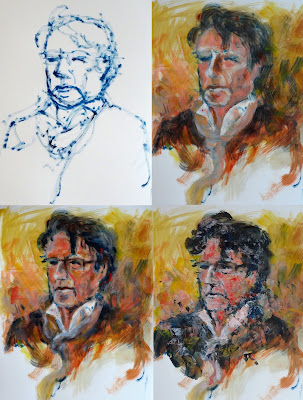 Below you see pictures of these four stages, from top left to bottom right. That one was was the last palette knife version.
I should have stopped at the third stage (see the result above).

I went through all these stages in about two hours time. The model was tired by then.
Posted by Rene Fijten at 21:55 4 comments: 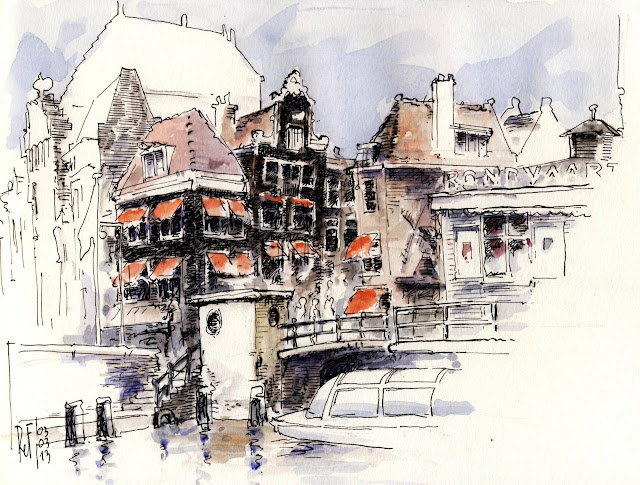 I was in Amsterdam last sunday, to visit the reopened "stedelijk museum", a museum about modern art.
It was quite nice weather, fresh but not too cold. The snow is more or less gone.
I made this sketch on the Rokin, near the starting point of the canal cruises "Rondvaart Kooij".
For those not too familiar with Amsterdam, the alley behind the bridge leads towards the red light district.
Posted by Rene Fijten at 20:47 5 comments:

Found on a bookshelf 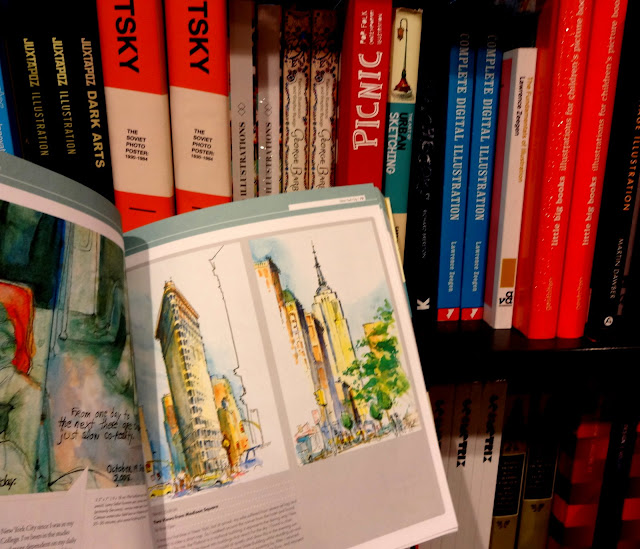 This gives a real kick.
I was in Amsterdam today and by accident found these 2 copies of the USK book for sale on the shelves of the American Book Center (my favourite amsterdam bookstore).
ABC is on the "Spui" Amsterdam, just off the Kalverstraat. 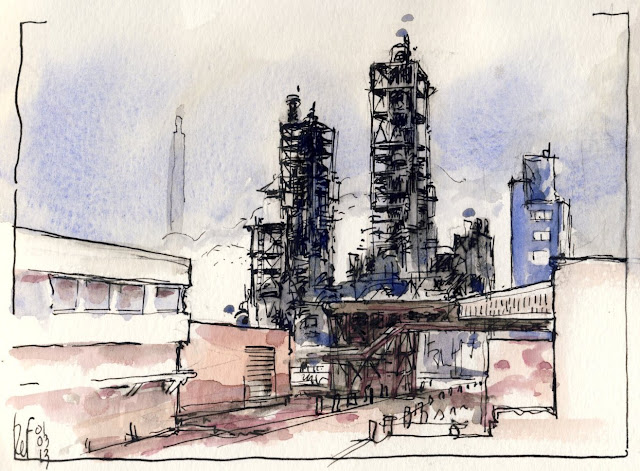 Got out for lunch today, and took a car to another part of the chemical plant where I work presently.
I can hear you say "a car ?", but please keep in mind that the Geleen plant covers an area of about 5x2 km.
The sketch depicts the LD-PEF installations. I am not sure, all installations look the same to me.
Posted by Rene Fijten at 20:45 2 comments: