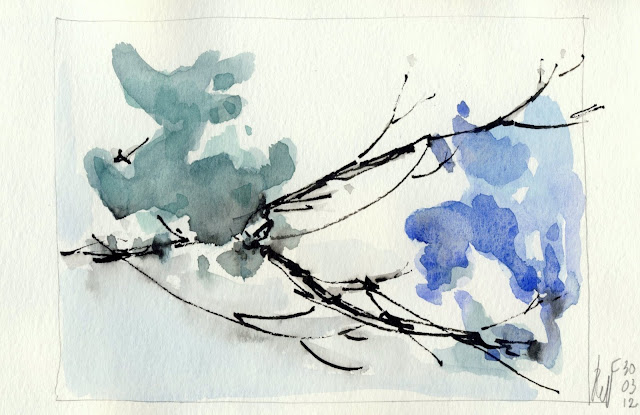 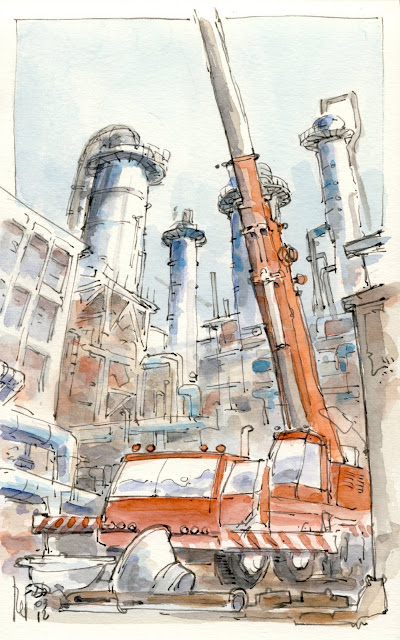 On Chemelot (the chemical plant where I work presently) massive renovation works take place, called TA/CAP . They do that every 10 to 15 years.
An extra of 1200 workers are brought in, continuously dismantling installations and building new ones. As the works have to be done in something like 8 weeks, works go on 24/7.
Here a sketch of one of the numerous mammoth cranes on the terrain.
Renovatie werken aan een van de productielijnen op het Chemelot terrein, Geleen.
Posted by Rene Fijten at 20:03 2 comments:

Self portrait in process 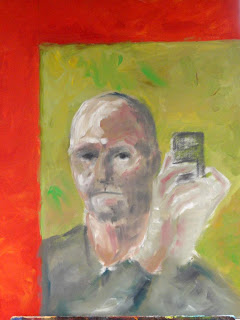 For artclass we had to make a painting with the theme "mirrors". I didn't like the theme, I did not want to make a painting with a person and its reflection, because you are focussing too much on the differences between the two.
So I decided to treat the theme mirror literally: a painting of a mirror and myself in it.
As I had to work on two different locations, I had to use a photo. So I decided to show that I used a camera as well. Besides, I like the idea of showing the hands, makes the self-portrait composition more interesting.
To make life more difficult, I decided to use oilpaint, for the first time on a serious painting.

First picture is the underpainting, made in acrylic on a 70x90cm canvas frame, based on a charcoal drawing. 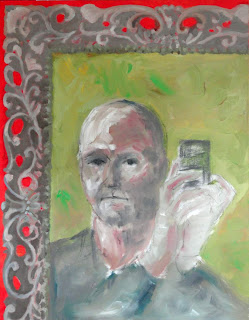 The second picture shows the mirrorframe, painted in oil.
I realised that the portrait part was not useful as underpainting, it was already too detailed. An underpainting should determine composition and shadow/light aspects. 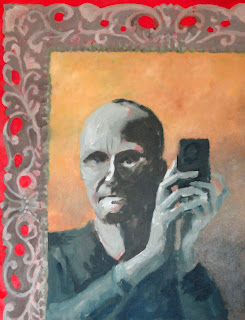 Here I adapted the face, in acryl. Note that I changed things like the length of the wrist.
I also started painting the background of the face, ochre on top of the yellow-green underpainting, to give the ochre a deeper effect. 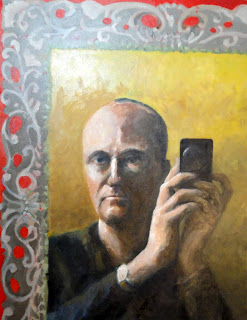 In this phase I worked on the face and hands again. It was a first time in oil, and I found oilpaint works nicely, you can push the colours into each other. But I also realised that I was working too detailed, with all kind of different touches and tiny colour transitions. Even though it comes closer to the photo, it drains life out of the painting. I already added some broader strokes, but it was too late to change the panting around. Next time I have to keep more distance
Also note that I have not yet painted my glasses, they sit on top of my face, and for that reason should be painted later (after the paint dried somewhat)
To be continued....
Posted by Rene Fijten at 18:15 5 comments: 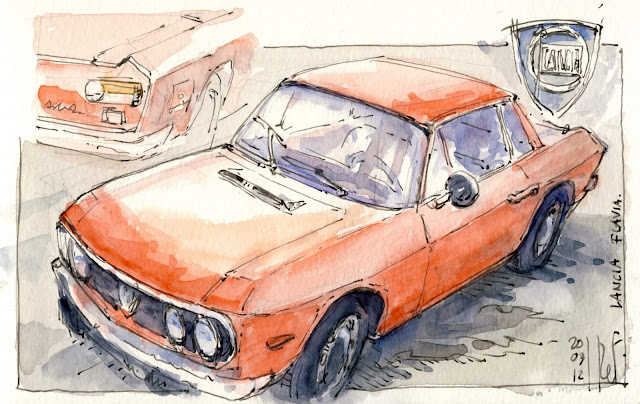 This morning when arriving at work in Geleen, I parked my car next to this vintage Lancia Fulvia. Couldn't resist making a quick sketch of it, while two interested security guards were watching me draw and paint. Unfortunately the car was in desperate need of repair. Vanmorgen vroeg op het parkeerterrein van Chemelot (Geleen), vond ik deze mooie oude Lancia Fulvia, in helaas nogal roestige en verbleekte staat.
Posted by Rene Fijten at 20:40 5 comments: 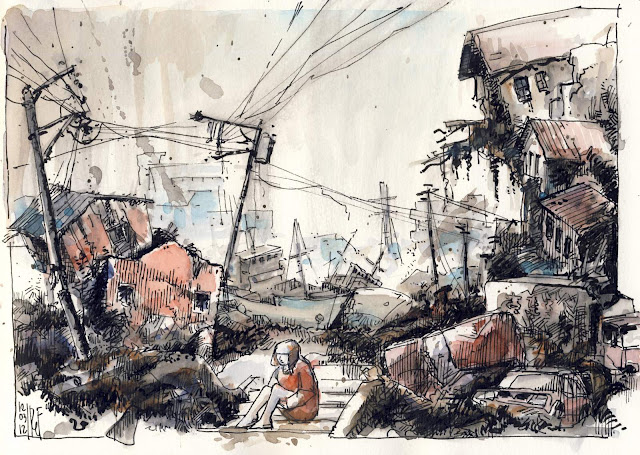 A year ago Japan suffered from this horrible Tsunami. I saw some footage from the devastation last sunday; some of the images stuck in my mind, and I reworked them in this drawing. Washed out Hero fountainpen ink in a large Moleskine.
Tsunami Japan, nu een jaar geleden. Afgelopen zondag zag ik wat beelden, daar moest ik wat mee, en ik verwerkte het in deze tekening. Uitgewassen vulpeninkt in een Moleskine.
Posted by Rene Fijten at 21:02 5 comments: 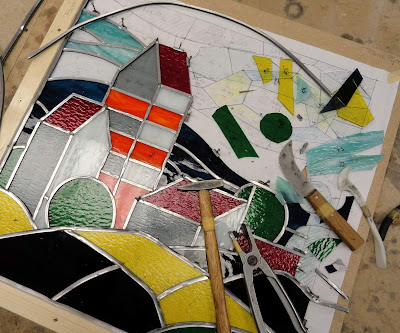 Not much inspiration lately. So I post here an update on my stained glass window, as of this evening. Proceeding slowly but steadily.
The size of this pane is 60x70cm. Still a long way to go.
Mijn glas in loodraam in uitvoering, de stand van vandaag. Nog een tijdje te gaan.
Posted by Rene Fijten at 22:51 2 comments: 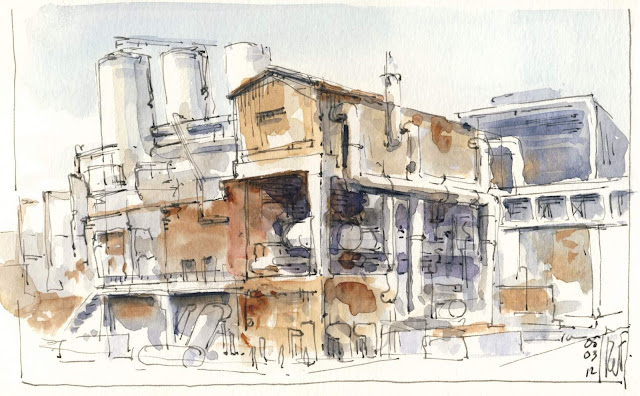 Still having my desk on the Chemelot plant in Geleen. The weather is nice for the time of year. So during lunchbraek I went out to draw. Not very inspiring, this view of one of the many plants on site.
Schets van een van de vele fabrieken op het Chemelot terrein.
Posted by Rene Fijten at 19:16 2 comments: 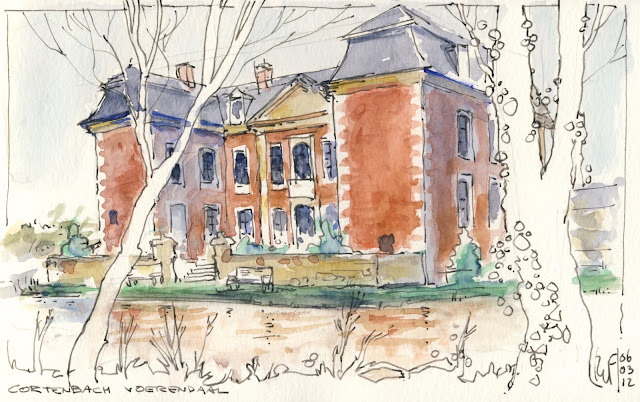 The castle of Cortenbach, in Voerendaal. Also near my home in Limburg.
Funny, we don't see it anymore, but there are a lot of these castles in our surroundings. I count at least 6 within a 5 km radius of my house. Castle Hoensbroek, Amstenrade, Terborg, Rivieren, Terworm, Cortenbach. Not all of them very large, but larger than the numerous strengthened farms that you find here.
A quick sketch made during lunchbreak, on my way between a client and the office. The weather was too nice not to go out of the car. Schets van Kasteel Cortenbach in Voerendaal.
Posted by Rene Fijten at 20:15 2 comments: 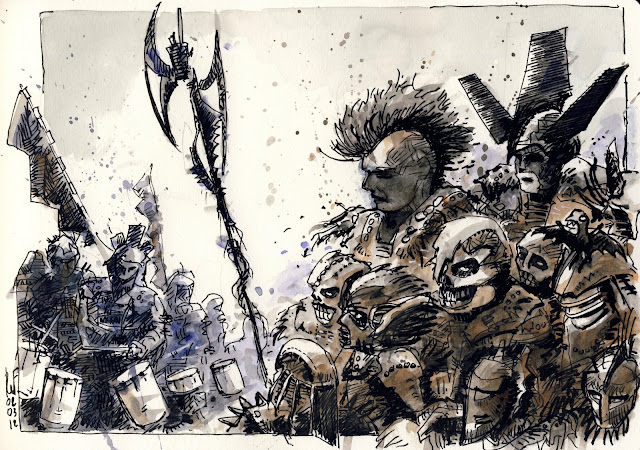 Carnaval in Maastricht 2012. I know, this looks like a scene from Lord of the Rings, but this an real existing  samba group. The group is called "Segura!" Escola de Samba, and they make Brazilian style Samba music. And dressed up like something between Darth Vader, Orks, and black clad samurai. Impressive suits and fantastic rhythms! Here an impression of the group that I found on youtube of the parade near where we were standing..