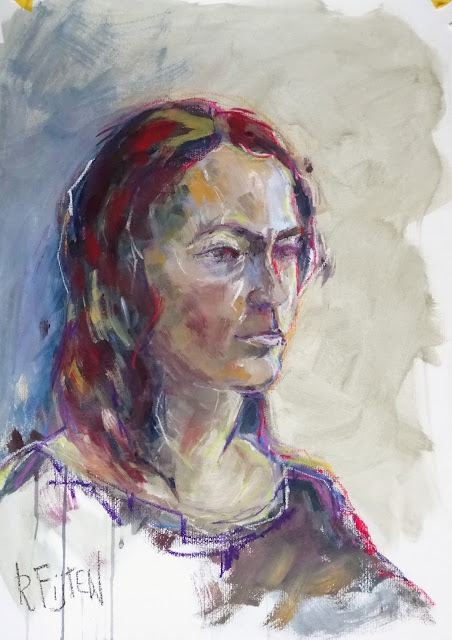 Silvana, painted this morning at Model Class.
Acrylic and oil pastels, 50x70cm. Took me 2 hours to make.
Posted by Rene Fijten at 17:56 No comments: 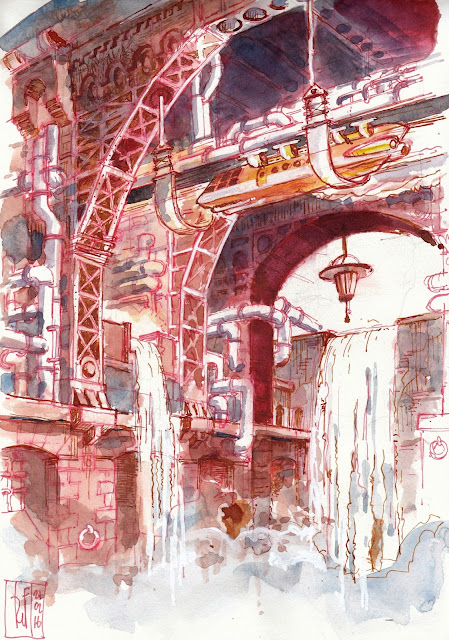 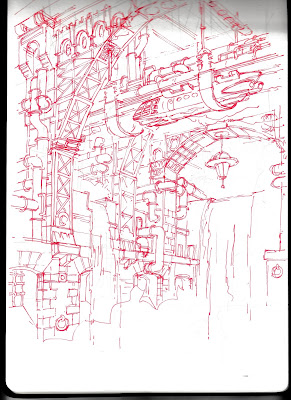 Just started drawing on a lazy Sunday evening.
First doodling around, then starting drawing with a fineliner, inventing the drawing on the go. Later washing it out with watercolour and brown ink, also using the bleeding of the (not so waterproof) red fineliner.

Here you see the original drawing, before washing it out. 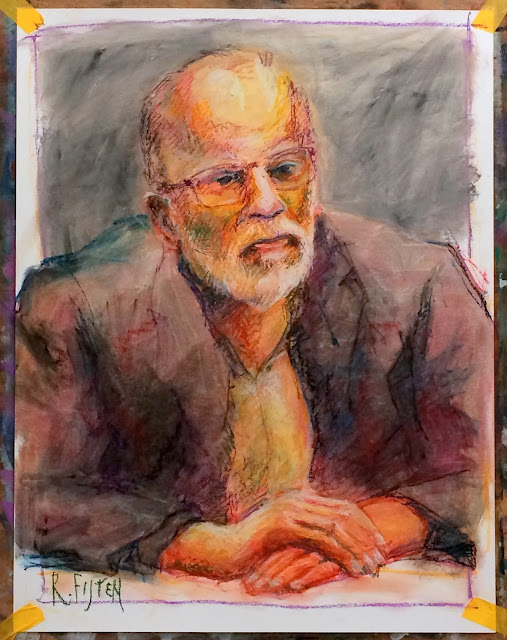 No time for the usual sketches, too much travelling and work. But I have my saturday morning model/portrait master class, we are exercising with oilpastels. This is a painting of model Jan, the husband of Els, one of our group. Oil pastels can be very stubborn.
Ittook me two hours to make
Posted by Rene Fijten at 19:57 No comments: 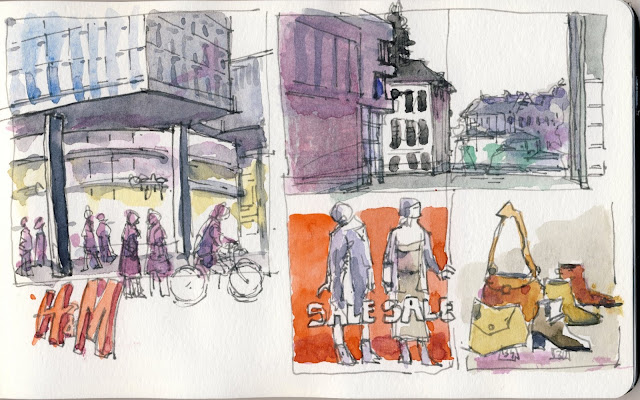 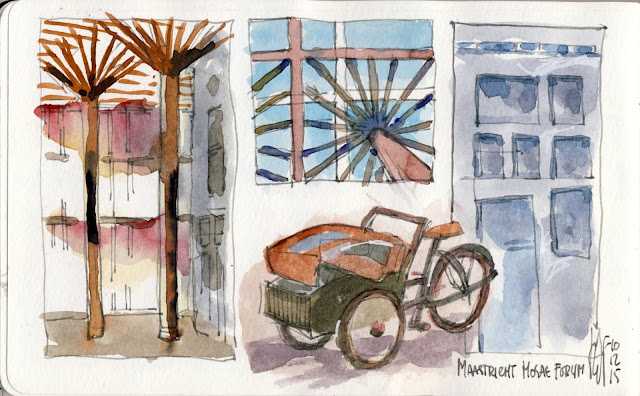 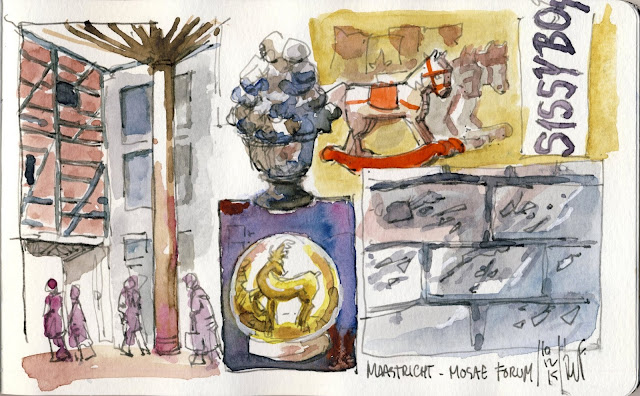 So here is the completed series. It took another hour to paint all 13 of them. Painted at home, the shop is still closed due to the fire.
So the average is about 7 minutes per sketch.
Posted by Rene Fijten at 21:40 No comments: 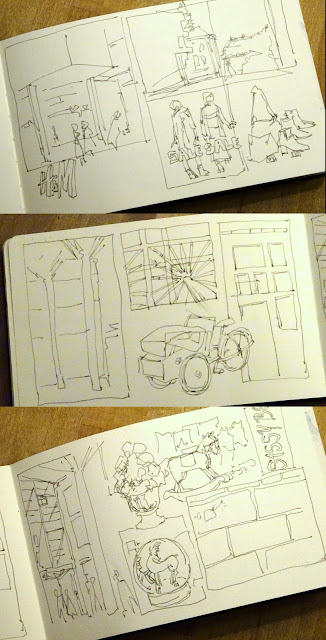 Here is something that I teach my students to do, but I never did myself. It was long overdue.

As part of my course in sketching for 1st year architecture students I do the following exercise: They have to start in the street and give a very quick impression of what they see, and how the location is felt. Big modern buildings, passing people, views towards the market place.
Then they have to walk to the half open atrium; at the point where they feel they entered that space, they have to sketch what they see again. It's a public, semi closed area, with tall treelike columns, and an intricate glass roof. And shopwindows, bicycles etc
Then they have to proceed to one of the façades: a huge medieval grey stoned solid wall, with square solemn holes with frosted glass as windows. Again: sketch what they see and feel.
The same for the shopwindow next to it.
Finally they have to ketch the stones of the façade. Try to catch the rugged stones.
It's like zooming in from large urban space to urban details.

I tried to do it myself, 13 images, done in less than 30 minutes, including walking, finding the right spot, making pictures. About 2 minutes per image.

The series was made during a lunchbreak in early december. I wanted to come back a few days later to add colour, but...... the shop had a fire, and the atrium was closed for a few months.
Posted by Rene Fijten at 14:16 2 comments: 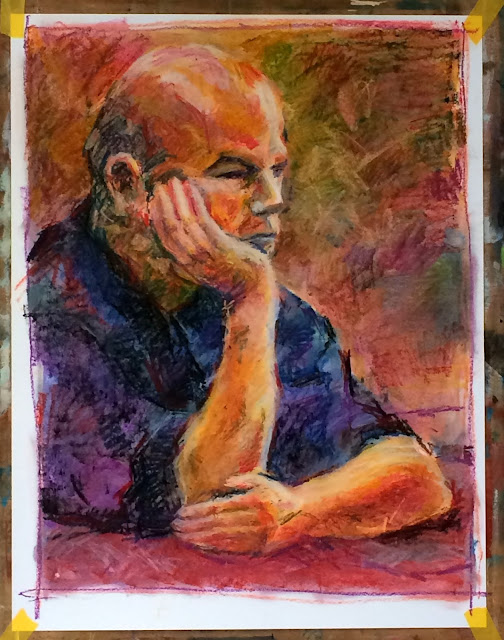 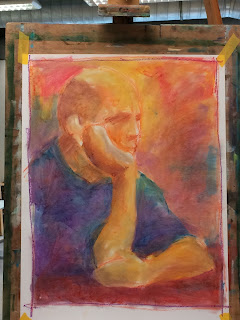 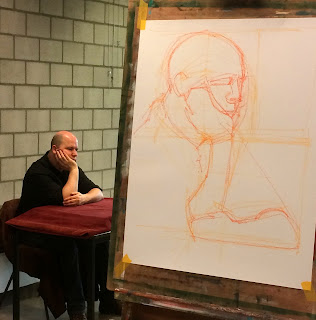 Here also some pictures of the early stages. about 40x60cm, oil pastel.
Posted by Rene Fijten at 19:45 No comments: 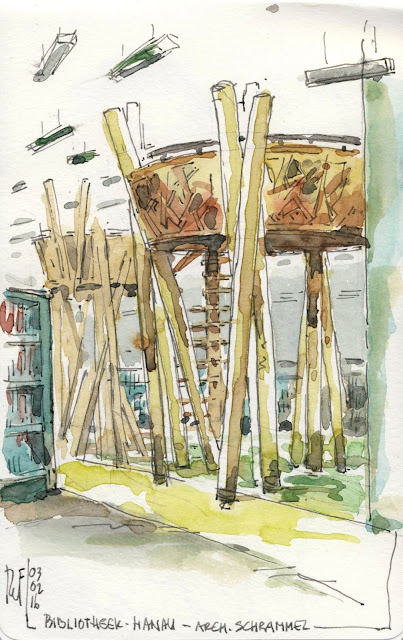 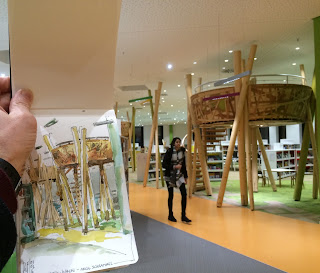 Still spending a lot of time in Germany these days, for business. So my spare time is limited, and I can't sketch a lot.
This is a rare occasion where I made a short walk before dinner in Hanau (a bit south of Frankfurt). They have a nice new shopping mall, with a brand new library. One of the most beautiful I saw recently. Architect Schrammel (Augsburg).
The childrens part has these little birdnests, where children can sit quietly and read.
I talked with the nice librarian; she told me the library was inspired by the main library in Delft, which (and so the circle comes round again) is next to where I lived for almost five years during my studies (back in the 80s).
Posted by Rene Fijten at 16:28 2 comments: 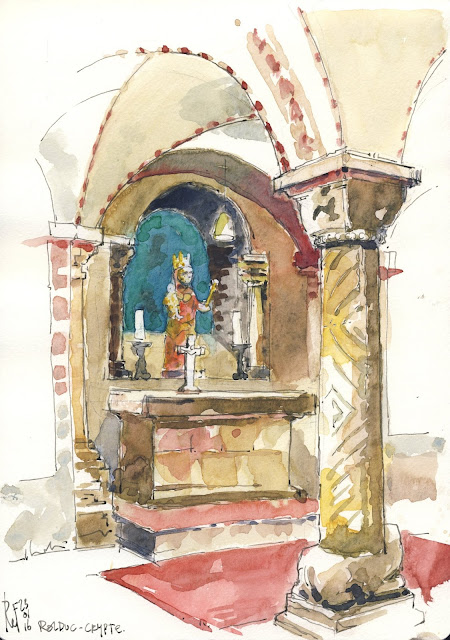 The second the two Sketchcrawl drawings that I made a week ago.
This is the crypt of the medieval Abbey church or Rolduc, dating back to the 12th century or so.
It was a hard perspective to do, but I think I managed well. It came out loose, without losing myself in overcorrect perspective games.
Posted by Rene Fijten at 20:12 2 comments: