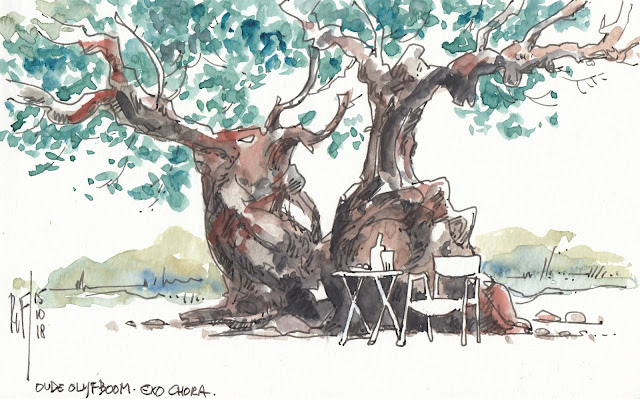 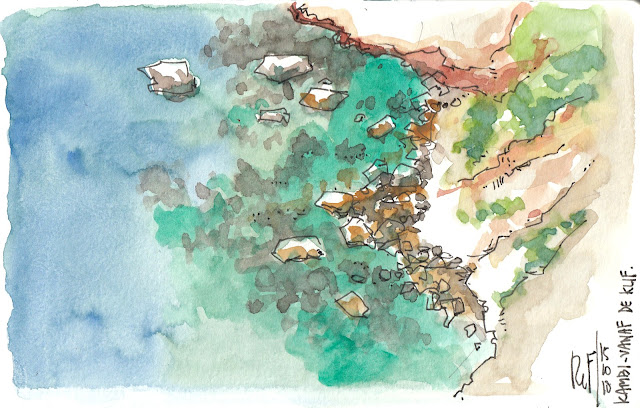 Two other scenes from Zakynthos.
First: we heard that there was a severe earthquake in Zakyntos (6,7), less than a week after we were there! I think we were very lucky not to have been there just a week later.
The top sketch is from the oldest olive tree in the Mediterranean. Over 2000 years old, hard to imagine there trees lived to see Romans walking. The tree is located on the village square of Exo chora. Just a bit further we had a lunch on a high cliff, overlooking the sea. I did not want to draw the view, but was more interested in the strange watercolours of the sea, just below the cliff. So that's what I drew.
Posted by Rene Fijten at 22:16 No comments:

Alykanas on the island Zakynthos 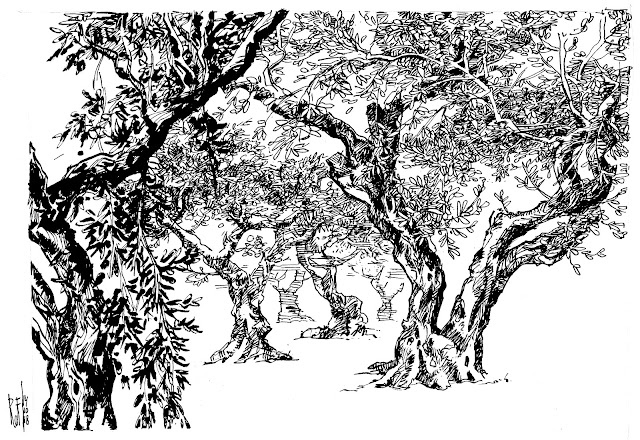 We had a nice bungalow with private swimming pool in the village of Alykanas. It was located in a field with numerous olive trees. I just had to peer over to fence. So there I was, sipping on some wine, on a sunny sunday afternoon, headphones with quiet classical music, spening my time making this intricate drawing. Almost therapy.
Posted by Rene Fijten at 21:29 2 comments: 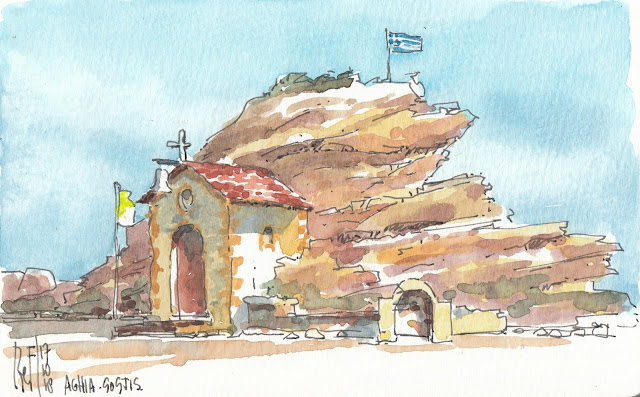 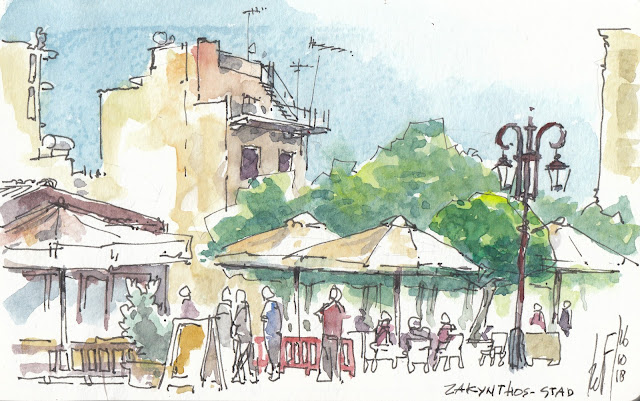 We just came back from a nice week in Greece. We visited the island of Zakynthos. Not so large, but really nice and varied. We had a small Jeep (a Suzuki Jimny) and drove all around the island.
It was nice weather, and as the tourist season was slowly coming to an end, it was not so crowded.
Here two scenes, a view of the city of Zakynthos itself, and a view of a little chapel on the harbour of Agios Sostis (famous for its turtles, which we did not see as it was after their breeding season).
Posted by Rene Fijten at 21:00 No comments: 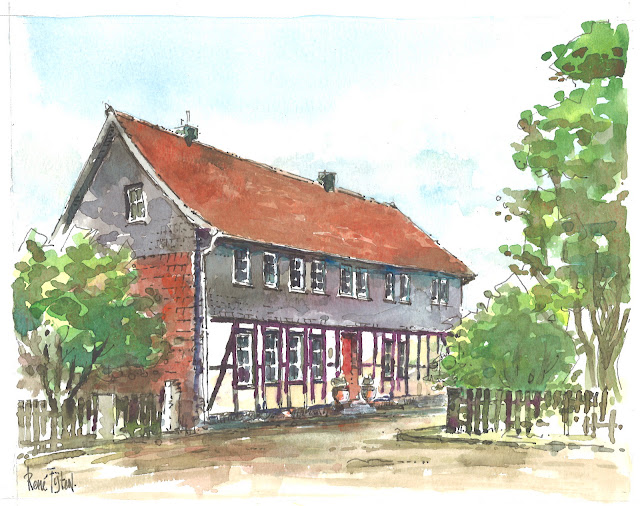 On the request of a client I made this watercolour of his parents house. A vintage woodwork building in the Harz, Germany. A lot of fun to do these drawings.
Posted by Rene Fijten at 20:17 No comments: 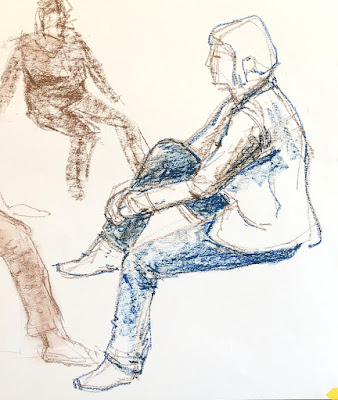 The Masterclass Model drawing has started again.
These are two live drawings of models.
The aim was to get the proportions and statures correct. Positions were contantly changing, max 10 minutes for one drawing.

Agnes in oil pastel above, and Julia in a charcoal drawing below. 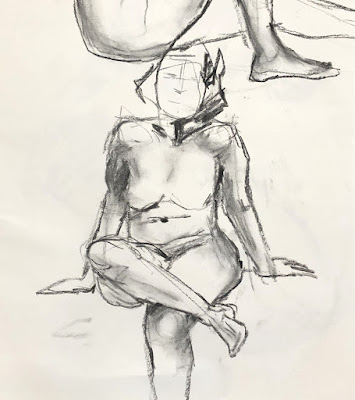 The silence after the bomb raid 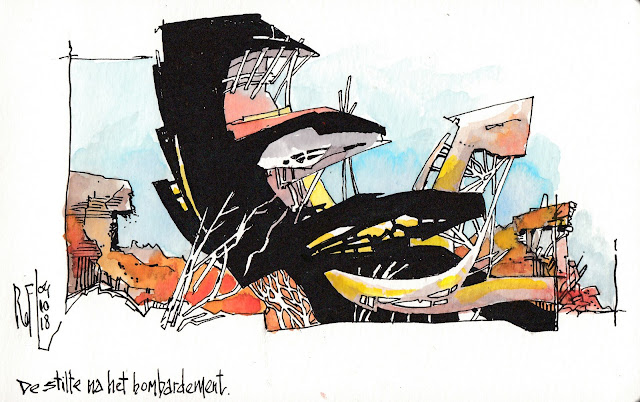 A random doodle.
Posted by Rene Fijten at 12:15 No comments: 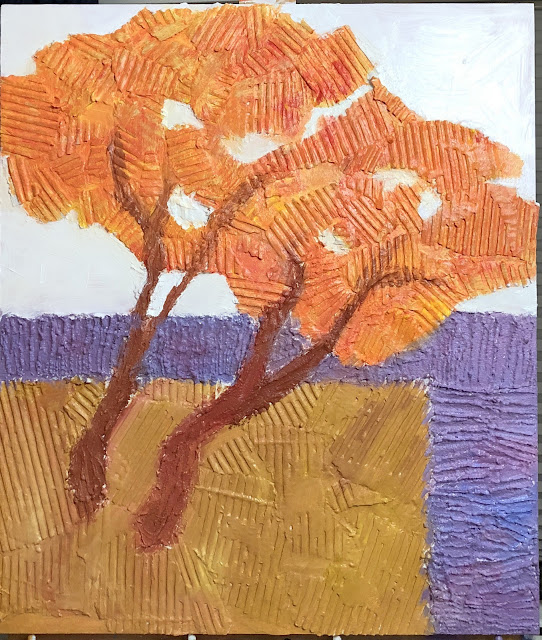 Started painting again. Work in progress. This is just the underpainting. It will get some layers of colours on top.
Posted by Rene Fijten at 20:49 No comments: