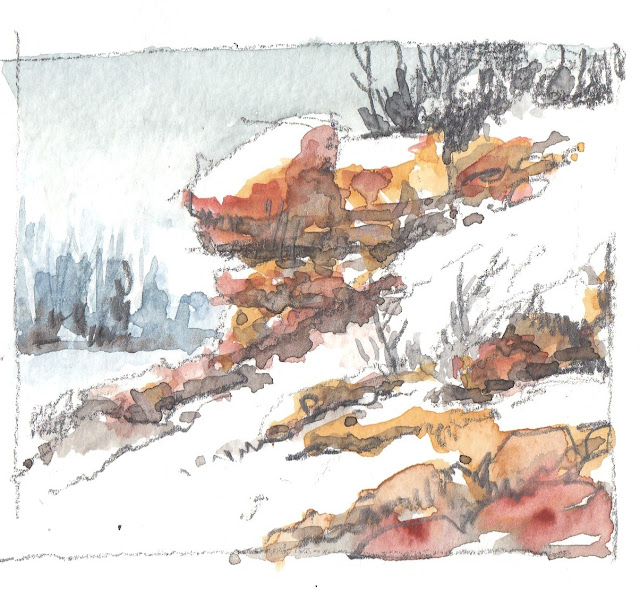 No urban sketch, but just a quick composition exercise based on a vague picture. I don't even know where this is. A made a series of these 50x50mm quickies. Fun to do.
Posted by Rene Fijten at 22:36 No comments: 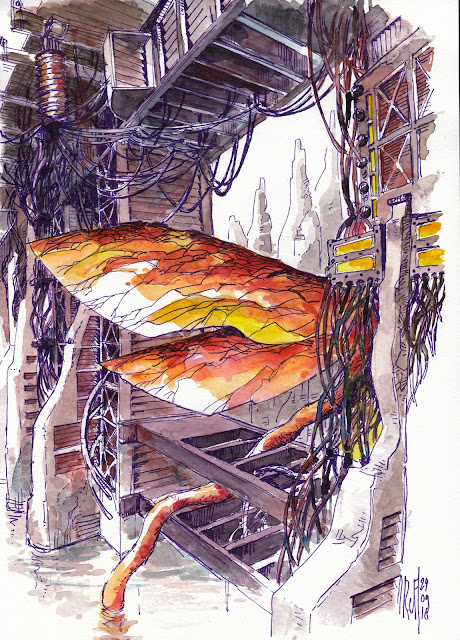 The wings of the red dragon. Drawn last Sunday, coloured last Monday.
Posted by Rene Fijten at 20:31 No comments: 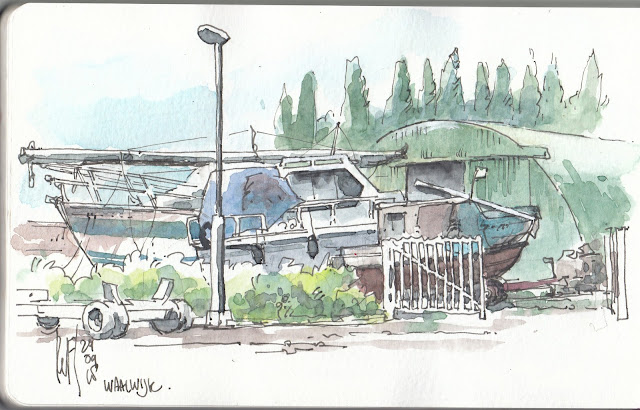 The rough edges of town. I was in Waalwijk for a project, but my appointment ended about lunchtime, too late to drive back to the office. I usually drive around to find a quiet spot, park my car, eat my lunch and listen to the radio.
At the edges of the town there are often some less attractive spots, with abandoned buildings or sloppy scrapyards. Or a cluttered boat repair shop. Always nice for a quick sketch.
Posted by Rene Fijten at 22:41 No comments:

Stranger on the train 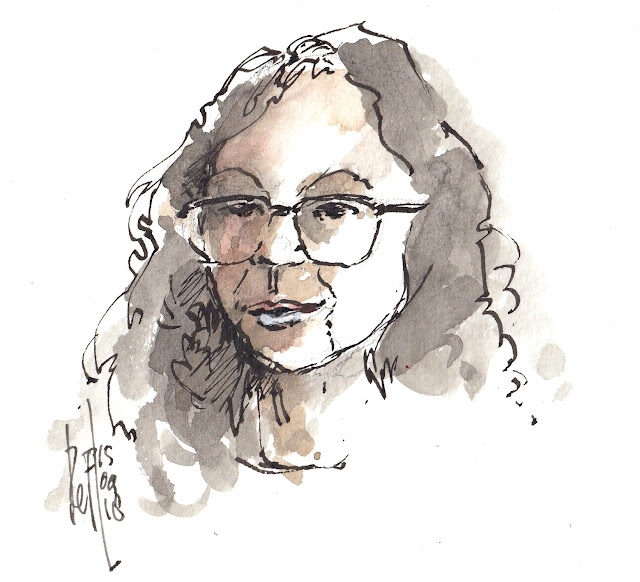 In the train, on my way to Amsterdam. This lady was sitting across the aisle, talking to her friend. A very quick sketch.
Posted by Rene Fijten at 18:22 1 comment: 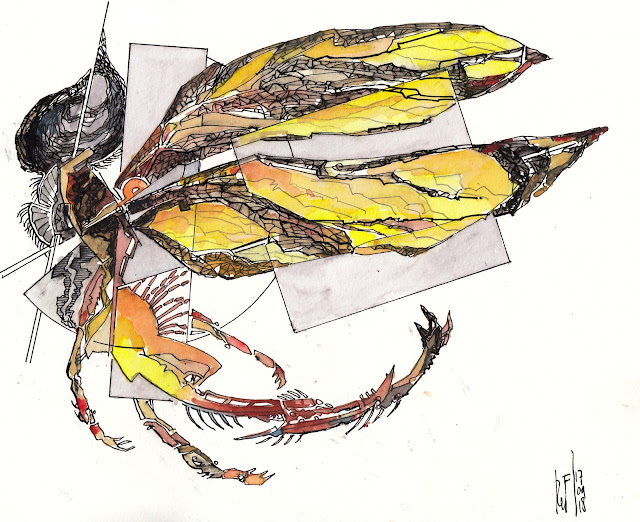 Not so much urban sketch these days, I am busy with other drawing things that I can't yet post.
But last Sunday we were sitting on the terrace, the weather was nice, and I saw these drawings by Dan Slavinsky. It inspired me to make this drawing. I started drawing the wing, and the drawing evolved itself.
Posted by Rene Fijten at 17:33 No comments: 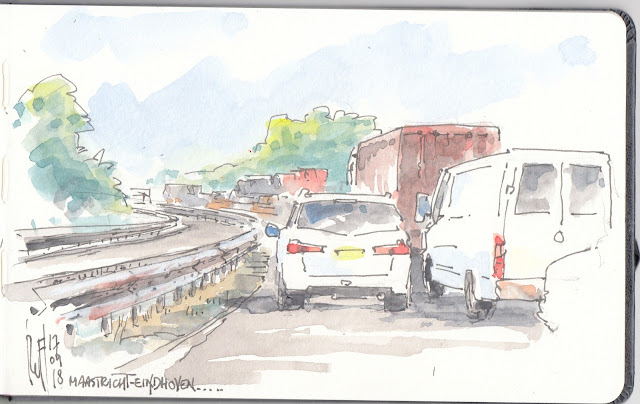 Driving from home to Eindhoven usually takes about 50 minutes. Today there was a huge traffic jam (an accident maybe?). Took me 2 hours for about 80 km.
But I had time to make this little sketch when we were standing still, just behind Weert.
Posted by Rene Fijten at 21:12 No comments: 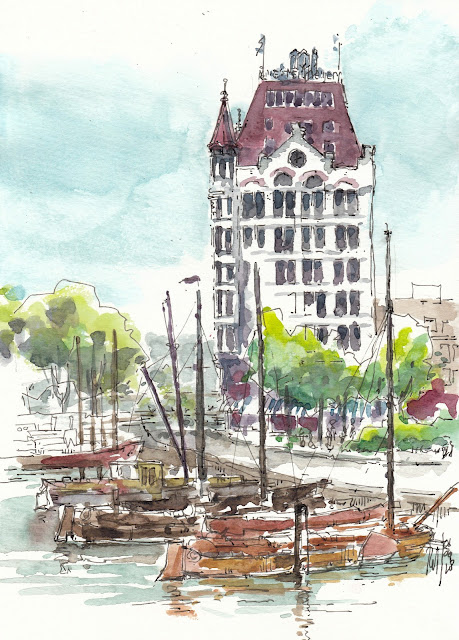 Rotterdam Sketchday, drawing of the the "white house", on the old harbour.
Posted by Rene Fijten at 20:44 2 comments: 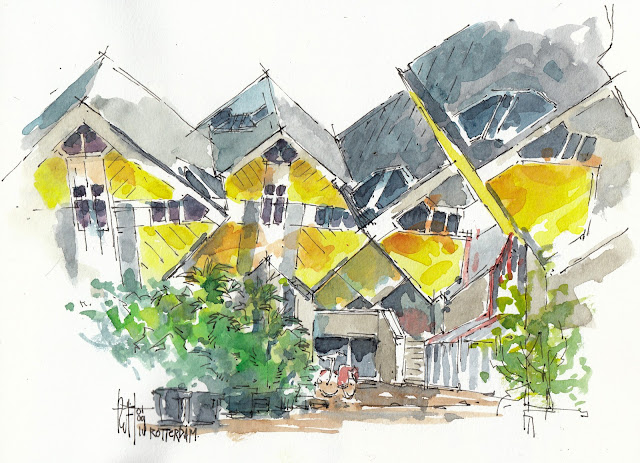 Rotterdam, last Saturday.
I was part of a team that organized the national Sketchday in Rotterdam, together with Jeffrey, Peter and Miryam. There were more than 80 participants, 5 workshops, and a dinner for almost 40 people.
the weather was perfect, and we had a terrific time, meeting and talking to old friends and a few new ones.
In between I had some time to sketch: as we were near the Cube-houses on th Blaak, I could not avoid to draw them. A drama of perspective, all angles and unusual vanishing points, but I still think it came out okay. Hard to believe these are actually houses, and people live in them....