Another one of Rekem 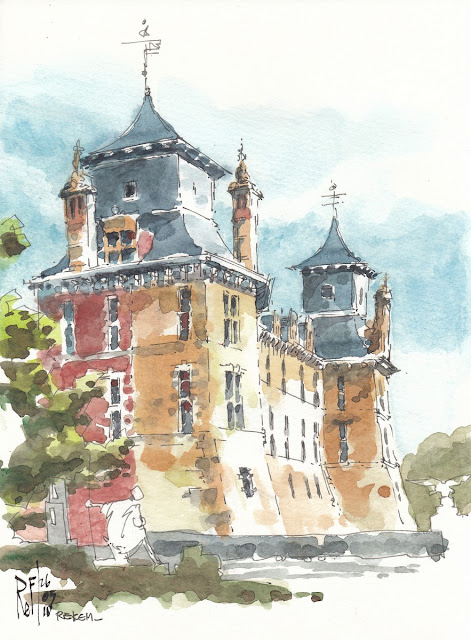 This is the third drawing I produced that day. Kasteel d'Aspremont-Lynden is dating back to 1500-something. But in bad shape, the main tower (here in front) is reinforced to keep it from collapsing.
Still, in all its decline, a very beautiful castle.
Posted by Rene Fijten at 20:50 No comments: 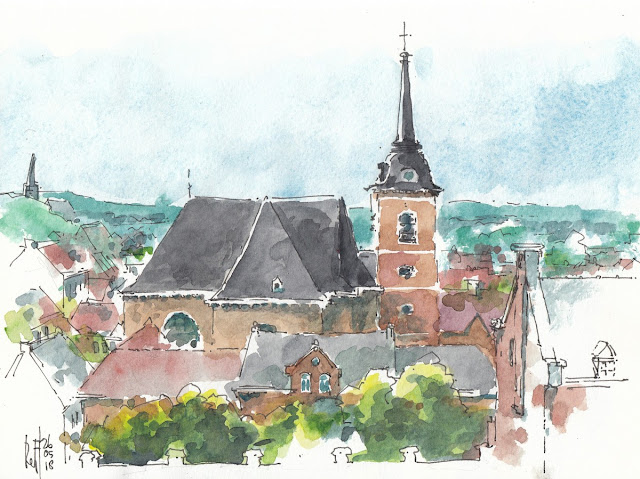 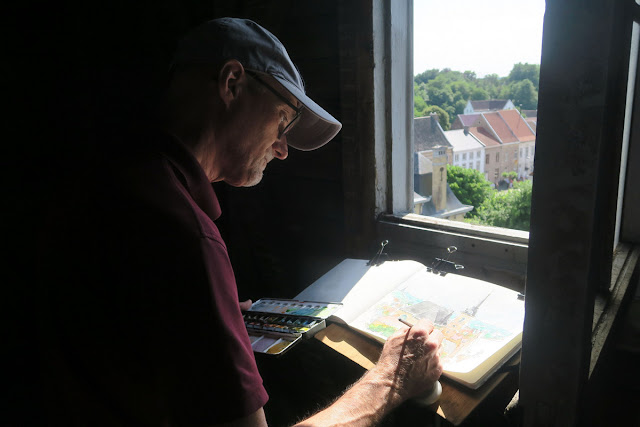 Last saturday I went to Rekem, in Belgium, just across the border.
There was an exhibition in the old caslte, organized by Matty Engelen, another Urban Sketcher.
The exhibition was very interesting, with a lot of beautiful works. 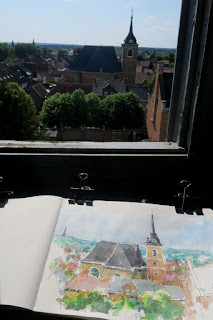 I couldn't resist making some sketches, especially when Matty told me about the access into one of the towers of the castle. When I was working on the above view of Rekem, the photographer Frits Paffen mounted the stairs, and made these beautiful pictures of the work in progress.

I made another drawing, that I will show in a few days. 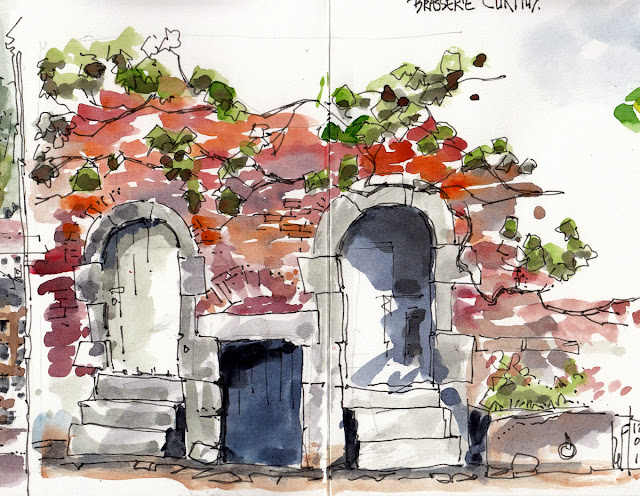 A few more of the sketches I made at the USK Liège meeting.
The top one during our lunch near the "escalier de Bueren".
The second is the view from the "remparts", the ancient defence walls. I have drawn often there. 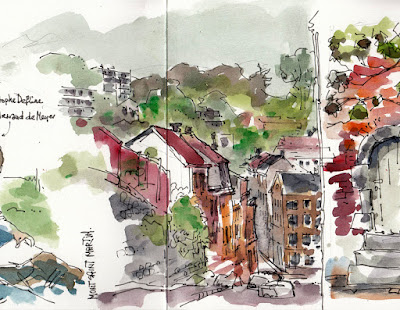 This one is a view down a very steep road. Hard to show the steepness. 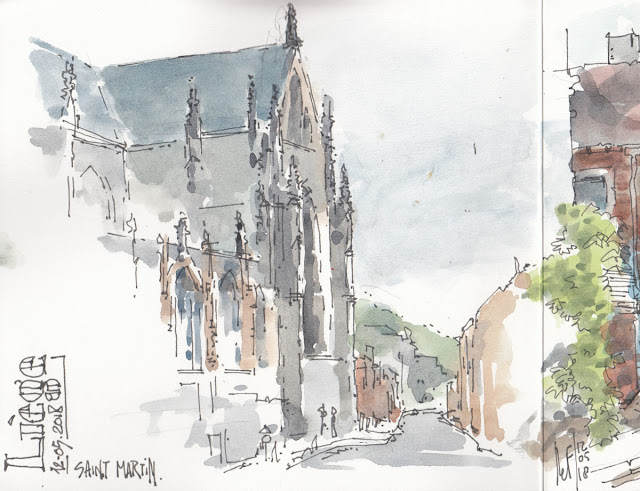 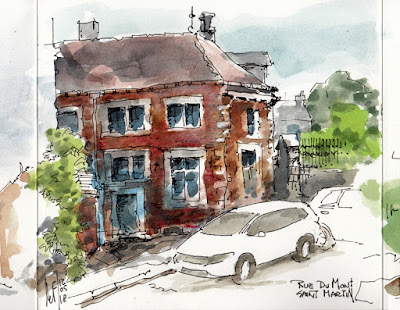 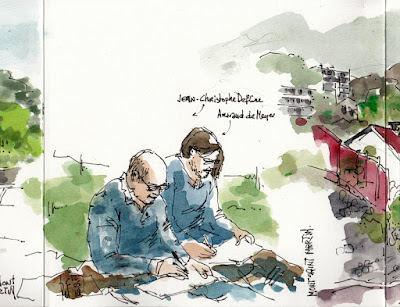 Four years ago I was invited in Liège to make a 5 meter long strip of drawings of the city, together with a group of other Urban Sketchers.
It resulted in a very successful book, over 10.000 copies sold.
There was a reprise last weekend, some 200 urban sketchers were roaming the city. I just had Saturday, received my 2 meter long laperello, and managed to fill it with some 9 drawings, in about 7 hours.

Here are the first 3, Michael Dessin brought me to this place, at the Church Saint Martin, where I met Arnaud and Jean Christophe again. Some scenes here.
Posted by Rene Fijten at 21:04 2 comments: 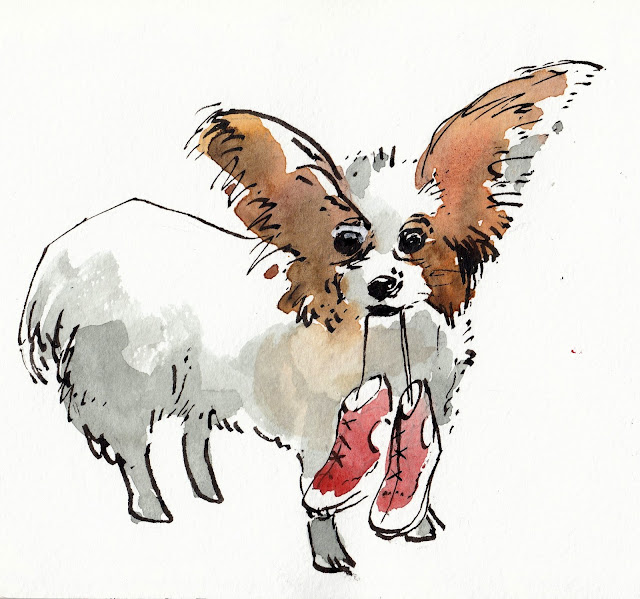 Another big surprise. Our son, Mart, and his girlfriend Lisa are expecting a child.
Such a great news!
It means that before the year is over we will have three grandchildren (if everything goes well of course).
The sketch is about their little dog Miku, which is a Papillon dog (Butterfly dog). Because of the ears of course :)
Posted by Rene Fijten at 20:55 1 comment: 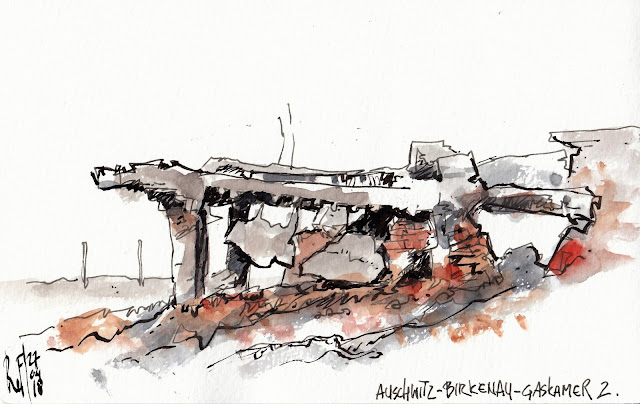 This is the most horrible of all sketches that I made. The remnants of the gaschambers of Auschwitz-Birkenau. The Germans tried to erase the evidence, so they bombed the gaschambers.
There were 4 of these in Birkenau, and one in Auschwitz itself. 1.100.000 people died in the camps, 90 percent in the chambers like these. Hard to imagine what happened here.
I had to make this drawing quick, we were with a guide, and he stopped here for only 7 minutes. 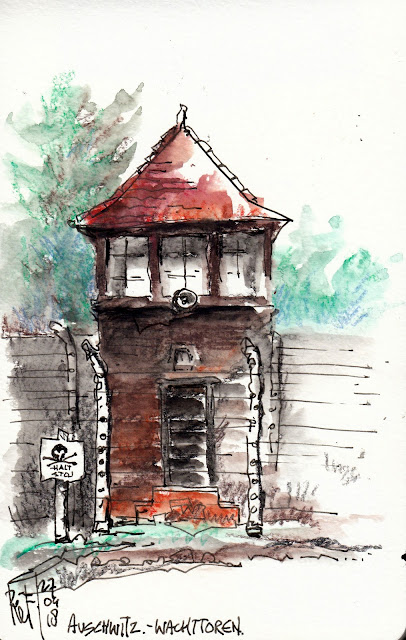 This is a sketch of one of the guardhouses of the original Auschwitz camp.
I had only 3 minutes to do the sketch, just enough for the linework. I added the watercolourpencil later at home.

Still, I think it conveyes the desperate feeling of that place.

I am glad I visited the place; of the camps I've seen so far (Dachau, Mauthausen, Theresienstadt), this was the most horrible by far.
Posted by Rene Fijten at 21:42 No comments: 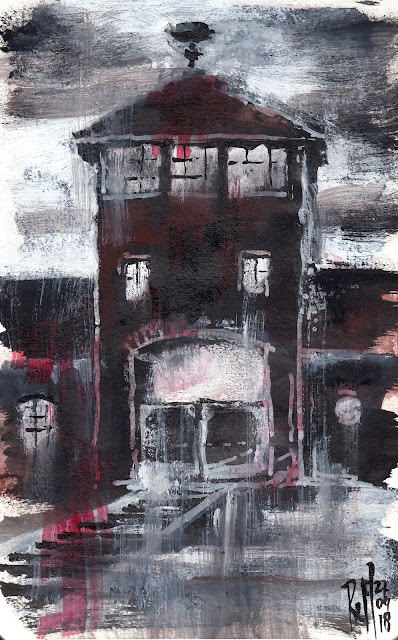 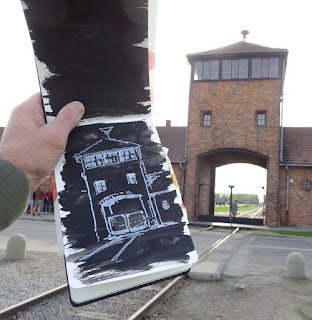 The entrance to the concentration camp Birkenau.
The trains would pass this gate, and unload the victims on the platforms behind it.

Just a few minutes from their death.
Almost a million victims must have passed these gates.

As you can see, the original drawing was a bit different, the white acrylic marker didn't perform well, and the official guide was waiting.
So I adapted the drawing with gouache and ink into something more fitting.
Posted by Rene Fijten at 22:39 2 comments: 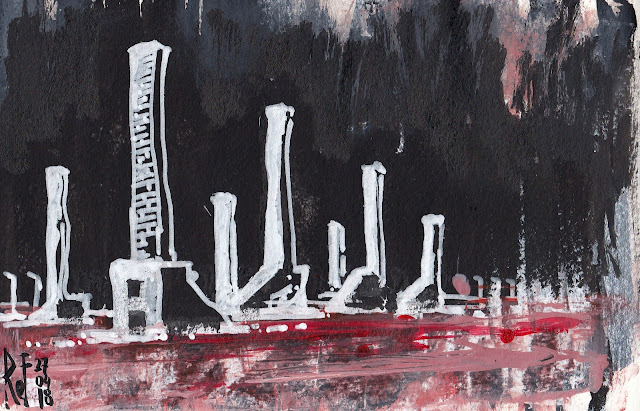 This may be the most horrible series of posts as of to date.
We had a nice long weekend in Krakau, Poland. And we visited the concentration camps of Auschwitz. Horrible.
In case you didn't know: Auschwitz consists of 2 complexes, the first camp near the town, and the larger camp Birkenau, some 3 km away. Especially the latter was horrifying.
An impression of rows of chimneys on the vast terrain, the only thing left of the endless barracks after they were set on fire to be burnt down.
Posted by Rene Fijten at 22:43 No comments: