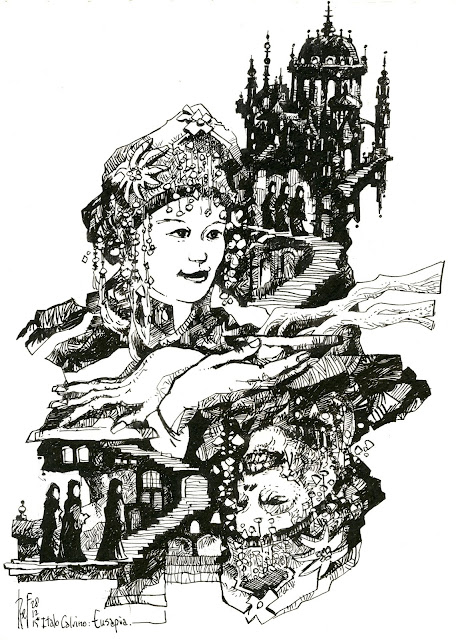 
CITIES & THE DEAD 3
No city is more inclined than Eusapia to enjoy life and flee care. And to make the leap from life to death less abrupt, the inhabitants have constructed an identical copy of their city, underground. All corpses, dried in such a way that the skeleton remains sheathed in yellow skin, are carried down there, to continue their former activities. And, of these activities, it is their carefree moments that take first place: most of the corpses are seated around laden tables, or placed in dancing positions, or made to play little trumpets. But all the trades and professions of the living Eusapia are also at work below ground, or at least those that the living performed with more contentment than irritation: the clockmaker, amid all the stopped clocks of his shop, places his parchment ear against an out-of-tune grandfather clock; a barber, with dry brush, lathers the cheekbones of an actor learning his role, studying the script with hollow sockets; a girl with a laughing skull milks the carcass of a heifer. To be sure, many of the living want a fate after death different from their lot in life: the necropolis is crowded with big-game hunters, mezzo-sopranos, bankers, violinists, duchesses, courtesans, generals--more than the living city ever contained.
The job of accompanying the dead down below and arranging them in the desired place is assigned to a confraternity of hooded brothers. No one else has access to the Eusapia of the dead and everything known about it has been learned from them. They say that the same confraternity exists among the dead and that it never fails to lend a hand; the hooded brothers, after death, will perform the same job in the other Eusapia; rumour has it that some of them are already dead but continue going up and down. In any case, this confraternity's authority in the Eusapia of the living is vast.
They say that every time they go below they find something changed in the lower Eusapia; the dead make innovations in their city; not many, but surely the fruit of sober reflection, nor passing whims. From one year to the next, they say, the Eusapia of the dead becomes unrecognizable. And the living, to keep up with them, also want to do everything that the hooded brothers tell them about the novelties of the dead. So the Eusapia of the living has taken to copying its underground copy. They say that this has not just now begun to happen: actually it was the dead who built the upper Eusapia, in the image of their city. They say that in the twin cities there is no longer any way of knowing who is alive and who is dead.
Posted by Rene Fijten at 22:06 No comments: 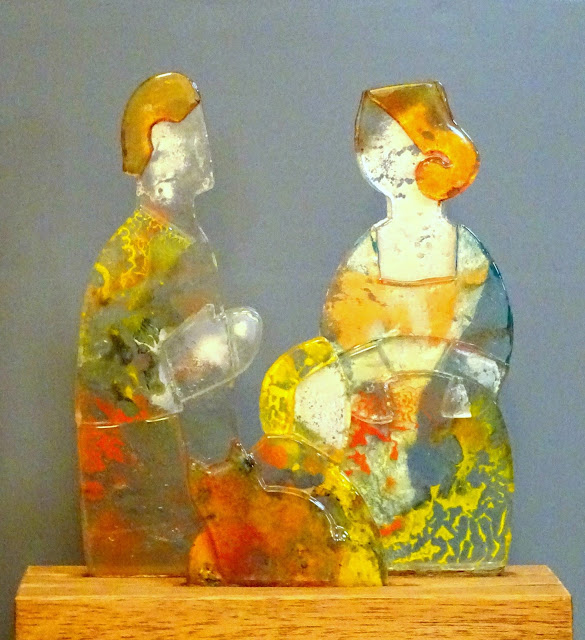 Another glass object, made specially for Rianne, Bob and our future grandchild.
This was the Sinterklaas surprise present, but it took some finishing. The pedestal was not ready and during mounting the head of one of the objects broke. But I managed to do the repairs, and I was able to present the statue to Bob and Rianne yesterday, during the family tradition Christmas dinner.
Posted by Rene Fijten at 15:56 4 comments: 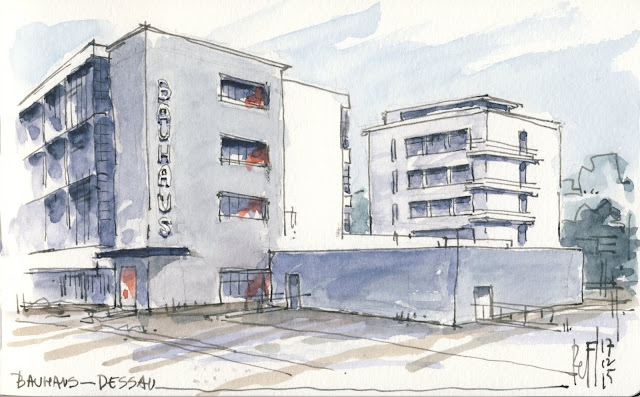 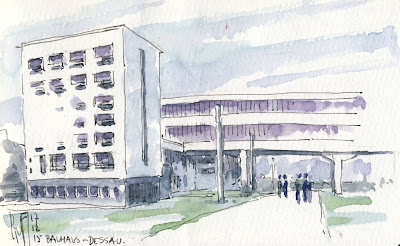 One of the advantages of business trips is that sometimes you get lucky and you arrive at places you never expected you'd arrive.
When I arrived at Bitterfeld (Germany, see the last post), I saw the sign next exit: Dessau. Just 20km away.
Dessau is the birth ground of the Bauhaus, and the origin of the Modern Movement in architecture.


Our world would have looked totally different without Bauhaus (for good or worse, that's difficult to say). But for architects it's like visiting the Vatican: here are the origins, here is the center of the universe. For architects anyway :)
I always wanted to visit the place, but it's a long way outside the usual tourist hangouts.
And I was even more lucky: unexpectedly the meeting in Bitterfeld ended early, and the weather was very un-december: 15 degrees C and a feeble sun!
I had a terrific time visiting the perfectly restored buildings and architecture exhibitions. And I could no resist to make two sketches. Even though I will admit that my style of drawing is not really fit for these kind of stark modernist buildings.
Posted by Rene Fijten at 17:22 No comments: 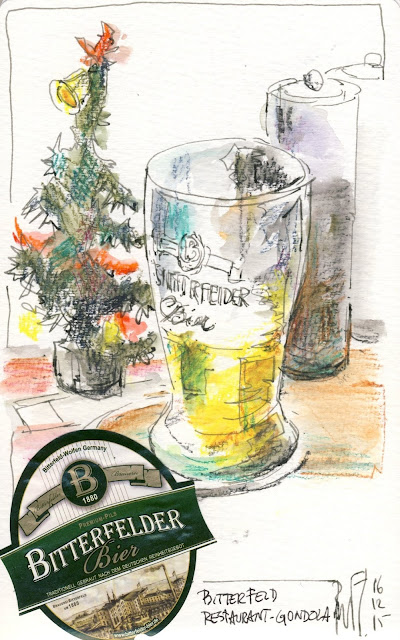 A lot of businesstrips these days, mostly to Germany. But it means long hours on motorways, even when you drive fast cars.
So what do you do when you sit alone in a restaurant in Bitterfeld (somewhere between Leipzig and Berlin)? You draw what's in front of you: a good glass of local beer and a quite pitiful small Christmas tree.
Posted by Rene Fijten at 21:05 No comments: 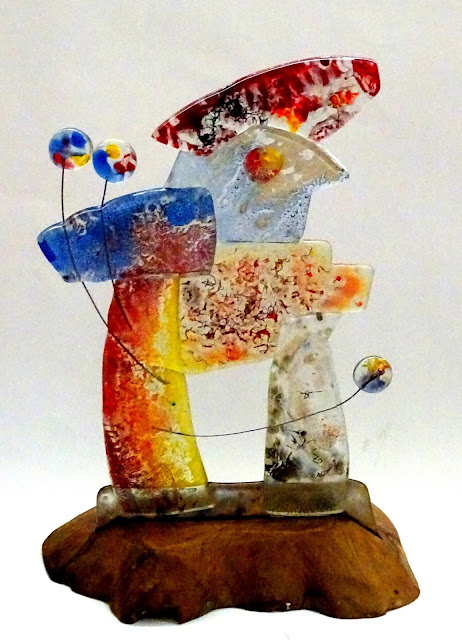 I had a rough and busy week, a lot of kilometers on the German motorways for business.
No chance to produce anything decent. Today I finally had some hours that I could spend on hobbies, and I made the pedestal for a glass fusion object I finished some months ago.
It's called Horus, and is about 25cm wide and 40 high.
It's standing on our windowsill now.
Posted by Rene Fijten at 16:51 2 comments: 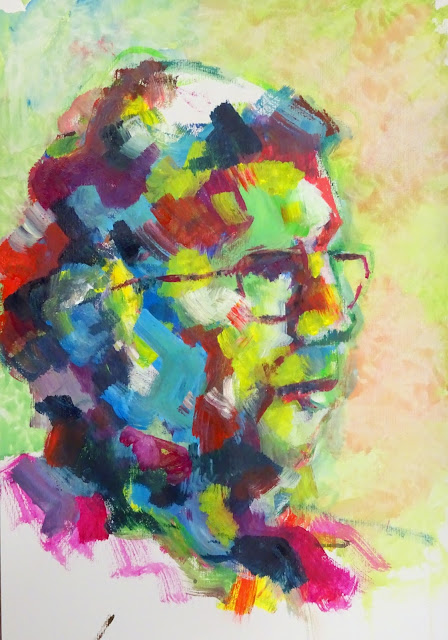 Interesting experiment: trying out an expressionist colour scheme. And it had to be done in a live portrait session, which makes it hard to deviate from reality as you see it.
The objective was to make an interesting colourfield, by playing with contrasting and often complementary colours, and still trying to maintain the facial expressions.
I tried to have the complementary colours (red vs. green) in the front area, so it would attract attention.
I also tried to spread colours over the page: if there is yellow at the frontal face, it should also appear on the other side.  But as I was painting contre-jour (I was looking at the non-lighted side of the face) it was difficult to find the proper spot and amount.
Acrylic 40x70cm, took me about an hour to make.
Posted by Rene Fijten at 13:36 No comments: 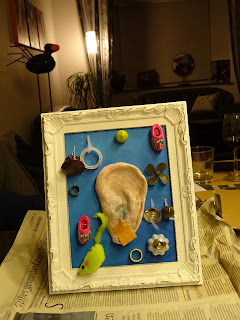 Every year I make the surprise presents for Sinterklaas on December 5th. In the Netherlands its common tradition that each person draws straws and makes a presents for another family member, but somehow it became a a recurrent event that I make them all.
Here are two of  the presents.
One present is making fun of the earring of my son. The earring is now gone since a few weeks, he came to his senses :)
The other one is referring to the braces of my wife Gertie, which will be taken out later this week. She'll have a glassbreaking smile what that ordeal is over.

The other surprises I will show later, they need a little finishing. 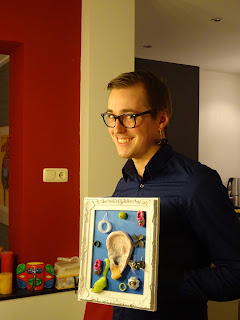 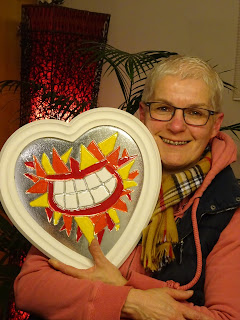 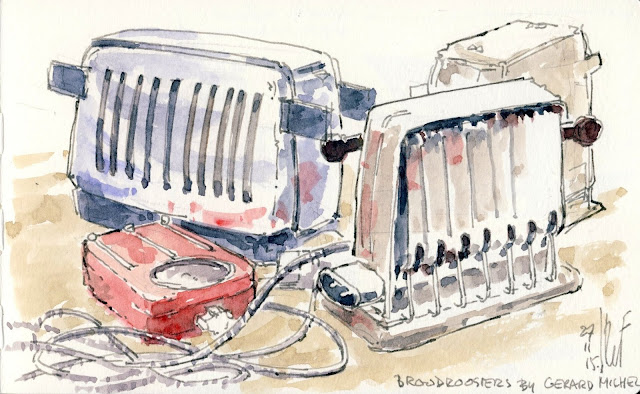 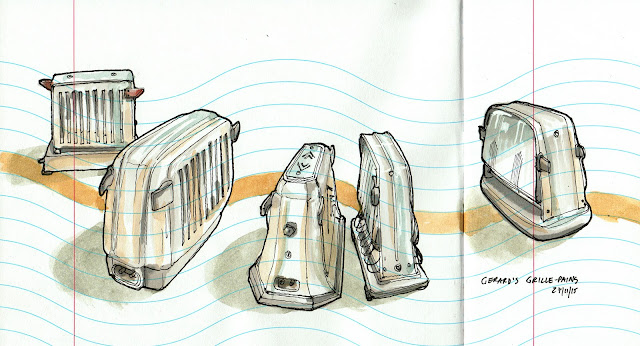 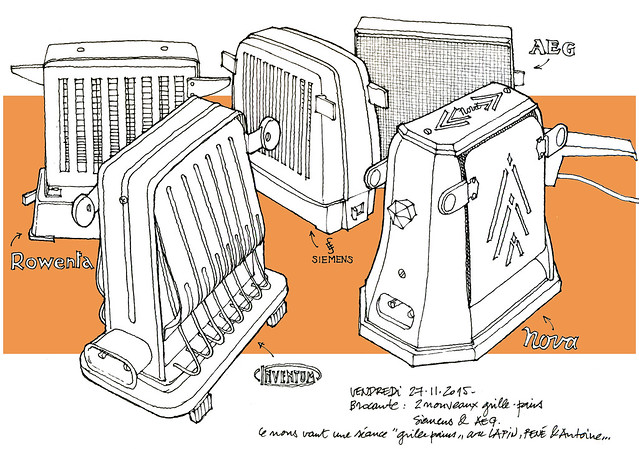 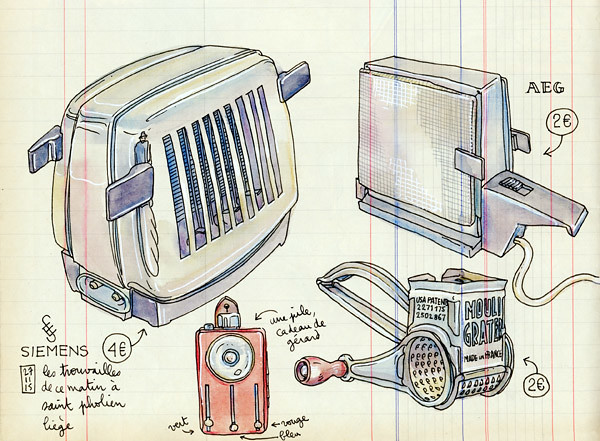 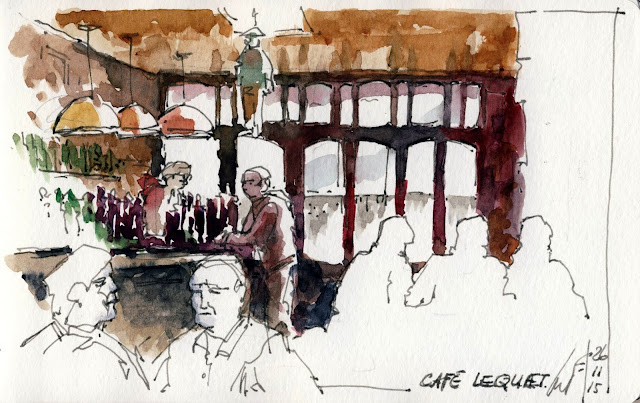 I was having lunch in Liège with my fellow USK friends Gerard, Antoine, Fabien and Lapin, together with two nice ladies of the "Emulation" (who organized the Liège sketching event).
We had terrific "boulets aux frites" (meatballs in thick sweet-bitter sauce with frites and mayonaise).
Of course everyone started sketching. Above my drawing. And here below is an impression of the same place by Lapin. 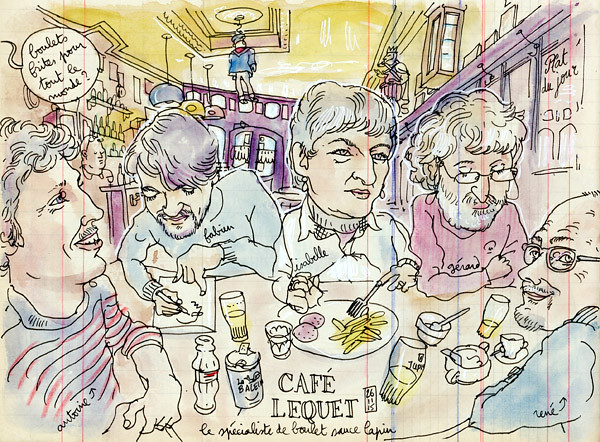 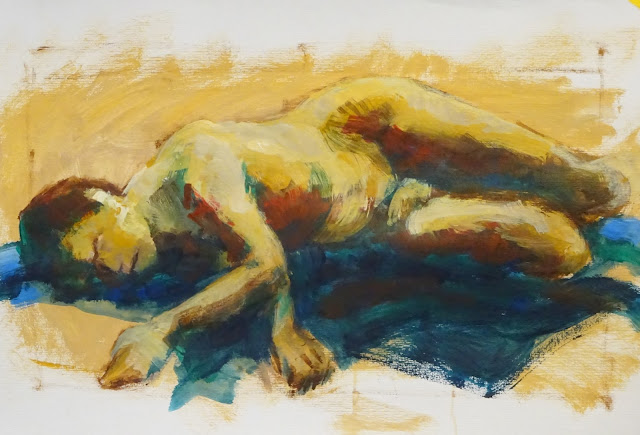 Colour exercise.
Posted by Rene Fijten at 23:11 No comments: 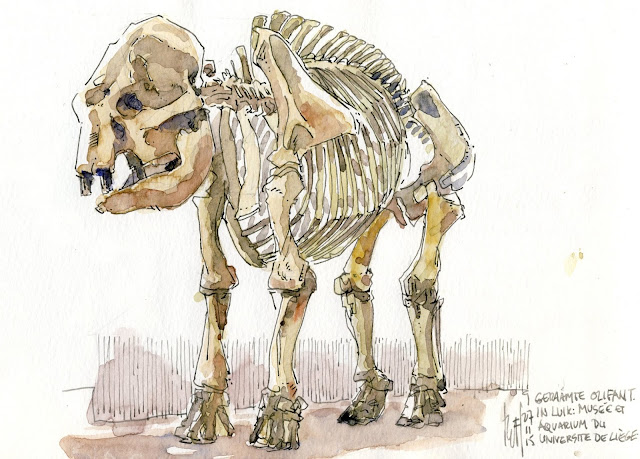 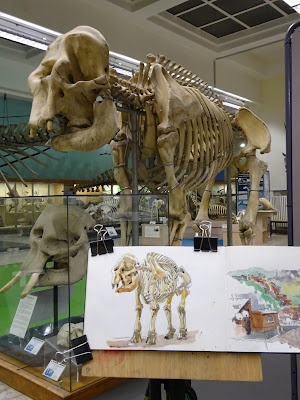 I was with Lapin, Florrian and Gèrard in the Natual history Museum In Liège. they had a lot of bones here, this is the skeleton of an elephant.
Posted by Rene Fijten at 19:16 No comments: 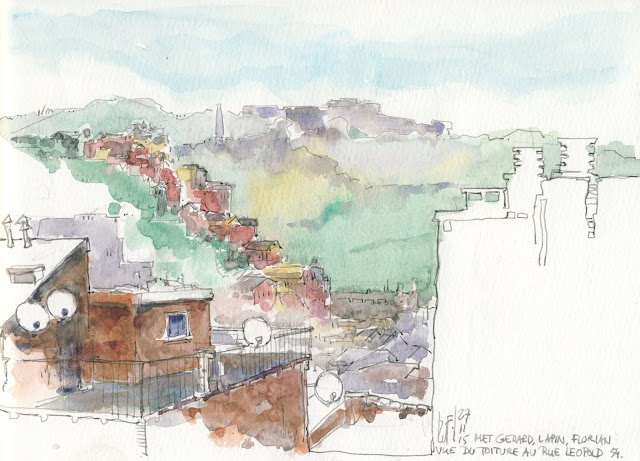 This the view to the other side, towards L'escalier de Buren. That is a long and steep staircase running up the hill, lined with houses. Gerard Florian and I were still sitting on the roof of taht appartment building along the Meuse (Maas).
Here you see the results of my companions: The first one is the panoramic view of Florian Afflerbach. You can see me standing at the right side of the central elevator building.

The other one is of Gerard Michel. Very very precise drawings! Notwithstanding the cold, we had a great time