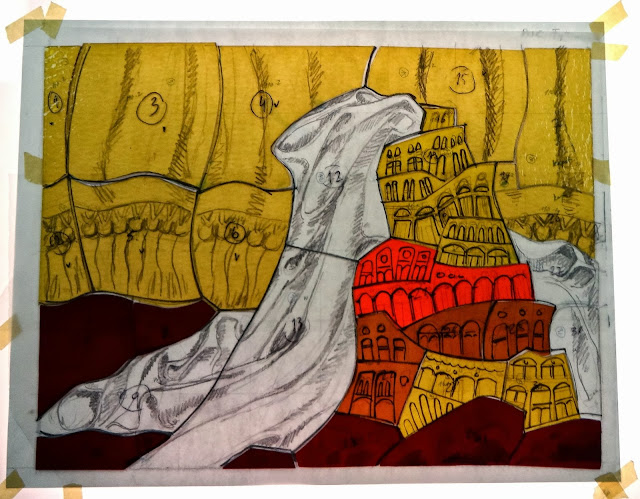 Working hard on my next stained glass window.
I want to learn myself traditional glasspainting. And as I am curious how these medieval masters did these perfect shaped clothes and drapes, I made this design to experiment with it.
I finished cutting out the pieces; after that I have to prepare the "paint" (which is very special and fine grained grey earth), then I can proceed with the "contour" procedure (making lines). That will be burned into the glass, after which I will do the "grissaille" procedure (adding shades). Another heating up, and then fitting the pieces into the lead. Still some way to go.
Posted by Rene Fijten at 23:00 2 comments: 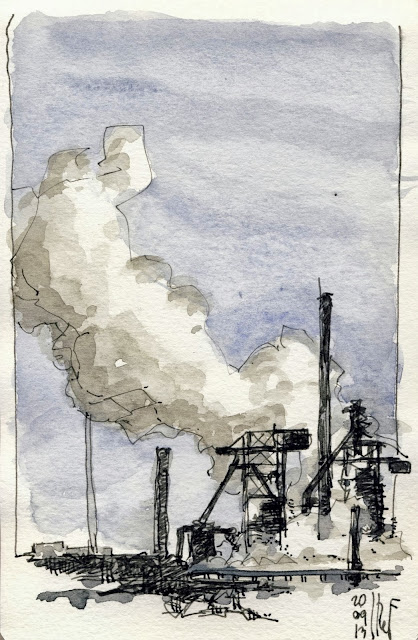 Last weekend I visited the Ruhrgebiet in Germany, together with a group of architects. We were there to visit art and architecture, and did a long row of interesting sites.
Among others a giant, 100 meter high balloon (by the artist Christo) in the former Gasometer in Oberhausen. And a church by Scharoun. And a 1:1 scaled mockup of a Mies von der Rohe villa. And lots of modern architecture. And modern art museums with works of Anselm Kiefer and Gerhard Richter.
And good food, good beer and pleasant company.

This is a quickly sketched view towards some steelworks, as seen from the "tiger and the turtle magic mountain". That is a rollercoaster for pedestrians (no joke).
Posted by Rene Fijten at 20:41 2 comments: 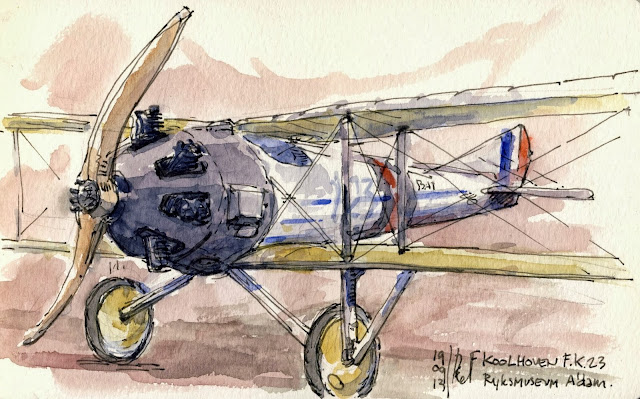 At our visit to the Rijksmuseum in Amsterdam, you would expect me to redraw a few of the famous paintings on display. But this was a rare chance: to draw a real old airplane. It was on display in the attic of the museum: a Dutch Koolhoven FK23 Bantam, dating back to 1917, the 1st World war.
Posted by Rene Fijten at 20:27 No comments: 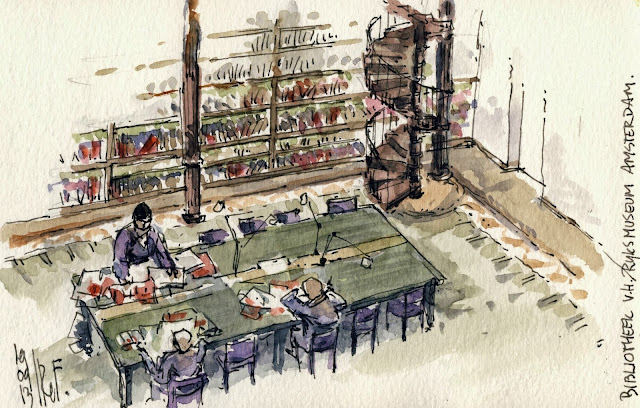 I visited the reopened Rijksmuseum in Amsterdam a few days ago, together with my daughter Rianne. It's the museum with the nachtwacht (the night watch), which was hard to see properly because of all the tourists standing in front of it.
I did not want to draw a Rembrandt or Vermeer (who could possibly improve on that) so I drew the library instead. As seen from above, from the gallery on the first floor.
Posted by Rene Fijten at 21:04 No comments: 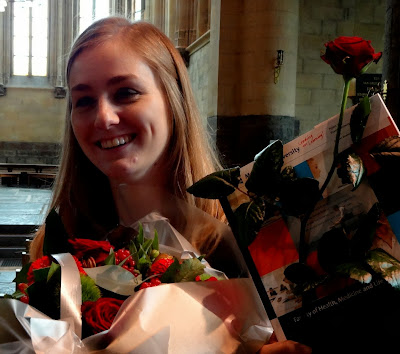 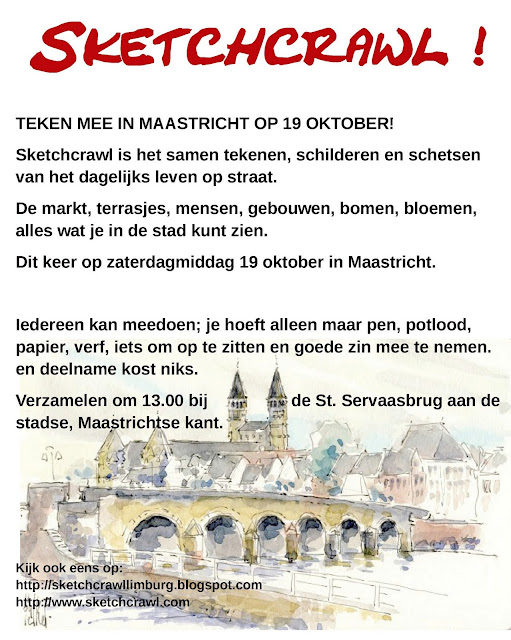 Yes, another sketchcrawl coming up: October 19th, 13.00 hours in Maastricht at the St. Servaasbridge on the city centre side.
Posted by Rene Fijten at 22:42 No comments: 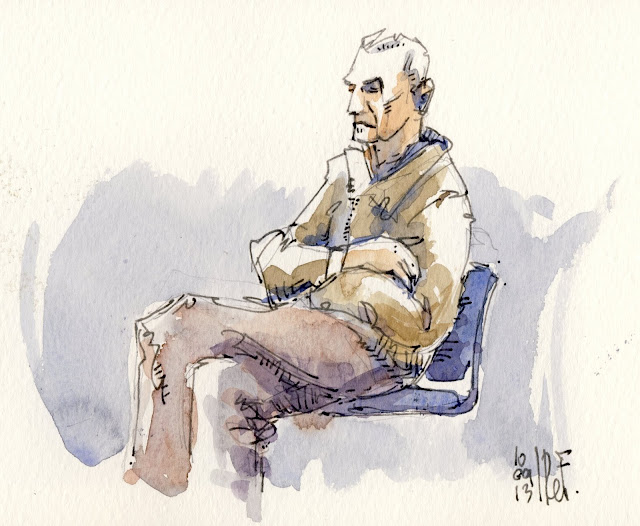 Had to spend some time waiting for medical tests in the Maastricht hospital. A good reason to draw one of the other waiting patients. He did not notice me drawing him, I think he was too absorbed about the upcoming visit to the specialist.
Posted by Rene Fijten at 18:30 2 comments: 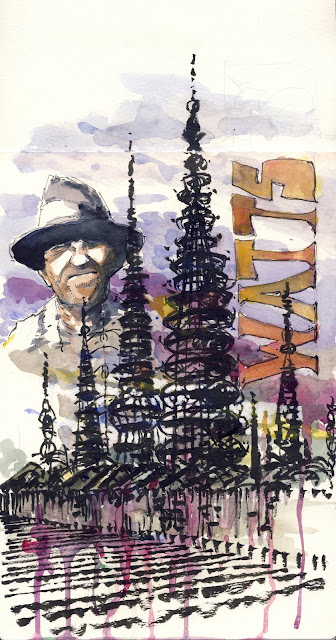 Watts towers is a complex of 17 open "filigrain" towers, all made by a single guy, an italian immigrant called Simon Rodia. He built these towers with his own hands in his spare time, between 1920 and 1955. The towers are huge, made of concrete and competely covered with tiles and broken porcelain.

I had never been very much interested in Los Angeles, but after reading about this building in the early 80's, it was the first good reason for wanting to visit LA.
Unfortunately it was located in a dangerous neigbourhood: a fellow architect once told me he was robbed at gunpoint in front of this building.

Anyway, I visited the building on the last day we were in LA. And fantastic it was. But also a bit like a landed UFO in a suburban street. Weird.

I tried to draw it on location, but failed miserably. Below you see the result. So bad that I never intended to post it here.

But sometimes I use failed drawings to experiment and try out things. And sometimes it works.
Even if the new version is still not that sparkling, it's far better than the original (at least in my opinion). 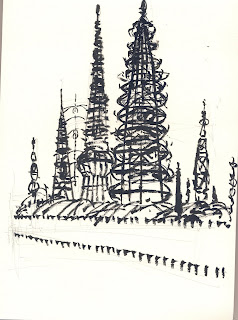 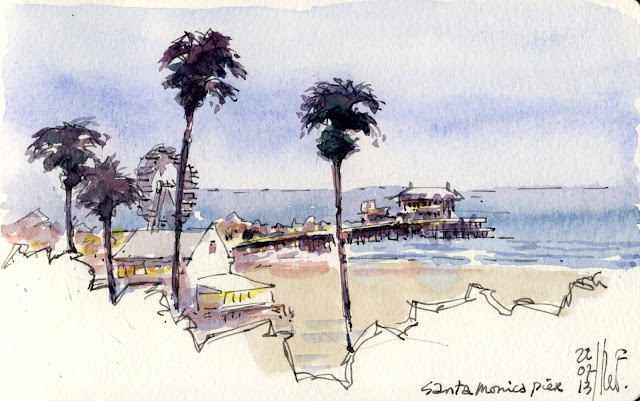 These are the last sketches I made on our last evening, on the Santa Monica pier. We dipped our feet into the Pacific Ocean (who knows when we will be able to do that again), and visited the pier under a bright shining full moon. And had a final look at the balloon man.
The next morning we flew back to Amsterdam. Another fine trip came to an end. And what a trip it was. We will undoubtably return one day. 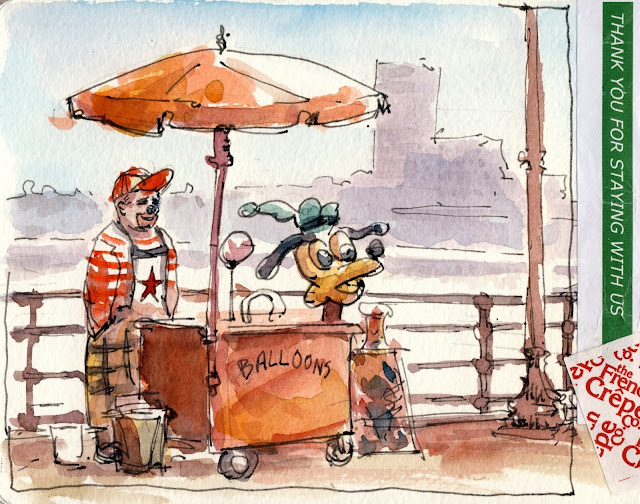 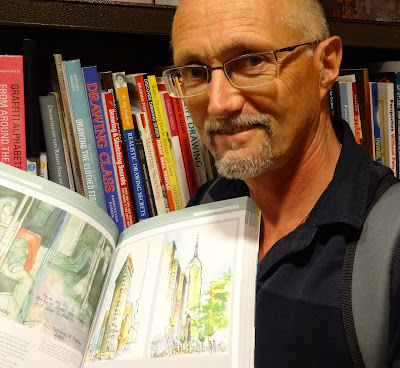 Now here is a moment that made my day: in Santa Monica we visited a bookstore, Barnes and Noble. Actually, it was the only bookshop that we saw in the USA.
And guess what: there was the Urban Sketchers book for sale, with two of my New York drawings in it!
I can tell you, that is a real thrill: walking into a shop on the other side of the world.... and finding back your drawings.

Harry Mulisch, eat your heart out.
Posted by Rene Fijten at 19:58 No comments:

Email ThisBlogThis!Share to TwitterShare to FacebookShare to Pinterest
Labels: USA 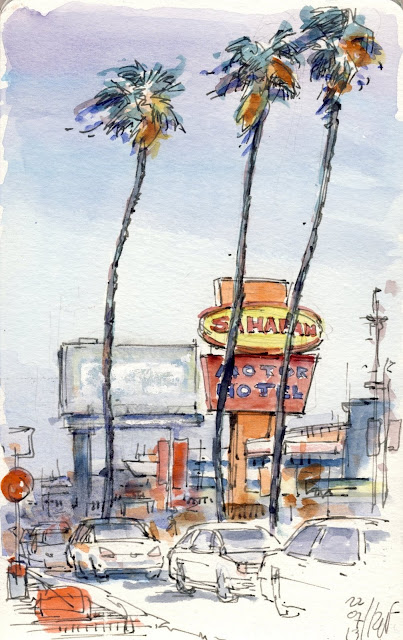 After downtown I went to the Hollywood part of Sunset Boulevard to visit the "guitar center". That's the famous music shop where musicians like Jimmy Hendrix and a lot of those blues guitar players bought their stuff. They had some terrific guitars there, some very beautiful Gibson Les Pauls.
I made this drawing near that place. Made the drawing in the heat of the day, but finished it enjoying a good coffee in a nearby café.
Posted by Rene Fijten at 20:38 2 comments:

Email ThisBlogThis!Share to TwitterShare to FacebookShare to Pinterest
Labels: USA 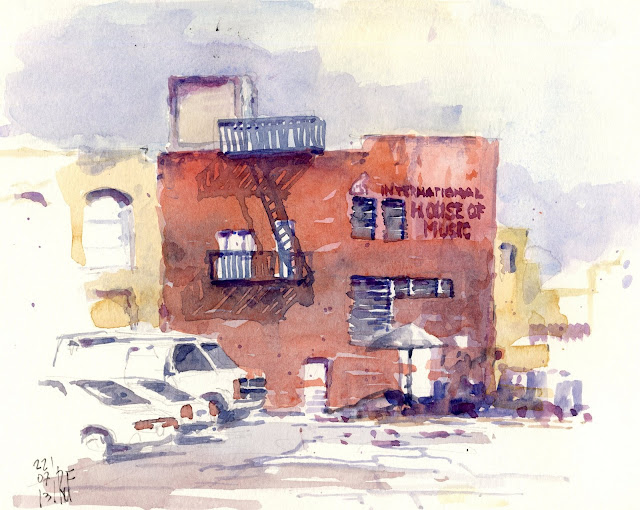 Trying something a bit different. This is a building in downtown LA, on South Hill street, next to the Grand Central Market, opposite Angels flight. There is a large parking lot and this façade.
I tried for an Urban sketch without lines, and lively colour panes. The result may be a bit rough, but I enjoyed doing this painting. It needs more planning and time, but I promised myself to try this kind of stuff more often.
Posted by Rene Fijten at 20:00 4 comments: 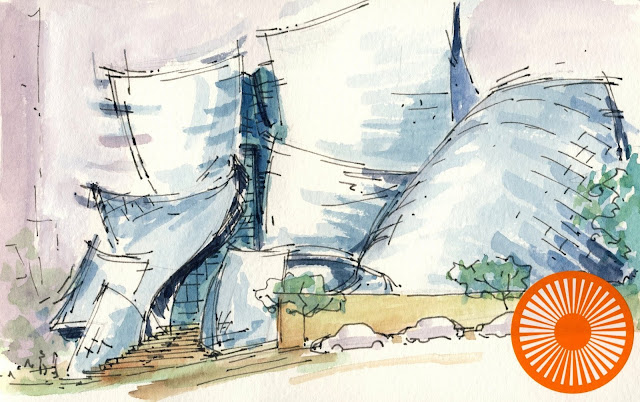 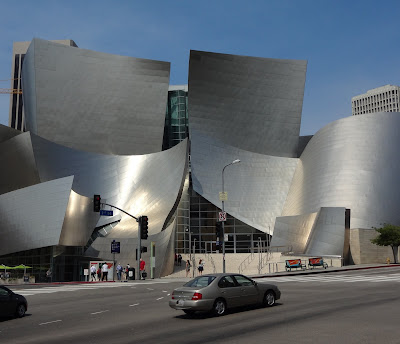 How can you draw a building like this? I wondered if just drawing the outline was enough to show the dynamics of the facade, but I thought it would be better to try and catch the idea of movement in itself.
I am not so content with the result, but here it is.

I made the drawing when I had a day alone in LA; the ladies went to Disney World and I was able to explore the city. Making drawings and visit sites I had wanted to visit for a long time. Like Watts towers, Walt Disney concert hall (by Frank Gehry), the Bradbury building, The Cathedral (by Rafael Moneo), Sunset Boulevard, the Guitar centre, Santa Monica and the pier and so on. The day was way too short.
I was able to tour the Disney music centre. Even though I was afraid that the interior was far too overdone for my taste (like the facade), in reality it was very well done. I loved the roof terrace and the sights throughout the building. And it was also very well detailed and materialised.
Posted by Rene Fijten at 20:00 No comments: 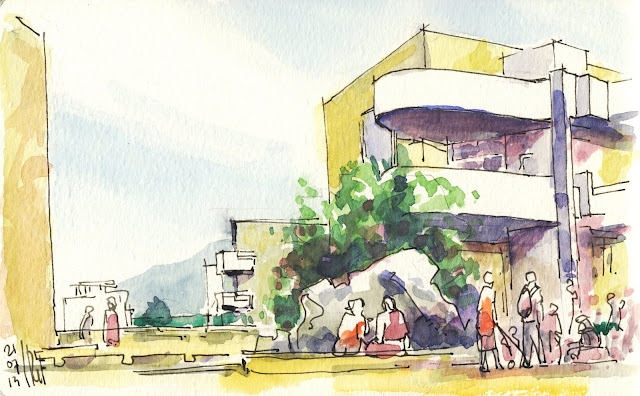 We visited a lot of things in LA: Hollywood, Beverly hills, Rodeo drive, Mulholland drive, Sunset Boulevard, City Center, Olvera street and the historic Plaza and so on. One day I sent the ladies to Santa Monica to check Bloomingdales, the malls and the shops on 3rd street. I took the opportunity to go to the Paul Getty Center of Arts.
Undoubtedly one on the best collections of art in the world.
And on a fantastic location overlooking LA. And with a fantastic building by the architect Richard Meier.
The only thing I am sorry about is that I found out too late that there was a fantastic temporary exhibition about architecture and design for the Urban environment in California. I already had to leave to go back to Santa Monica.
Anyway, here are the sketches I made of the buildings of the museum. 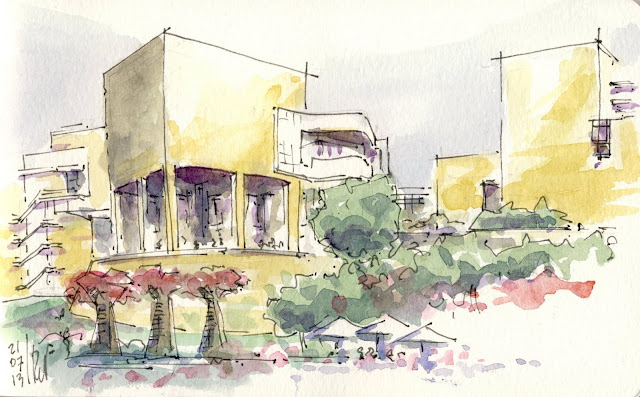