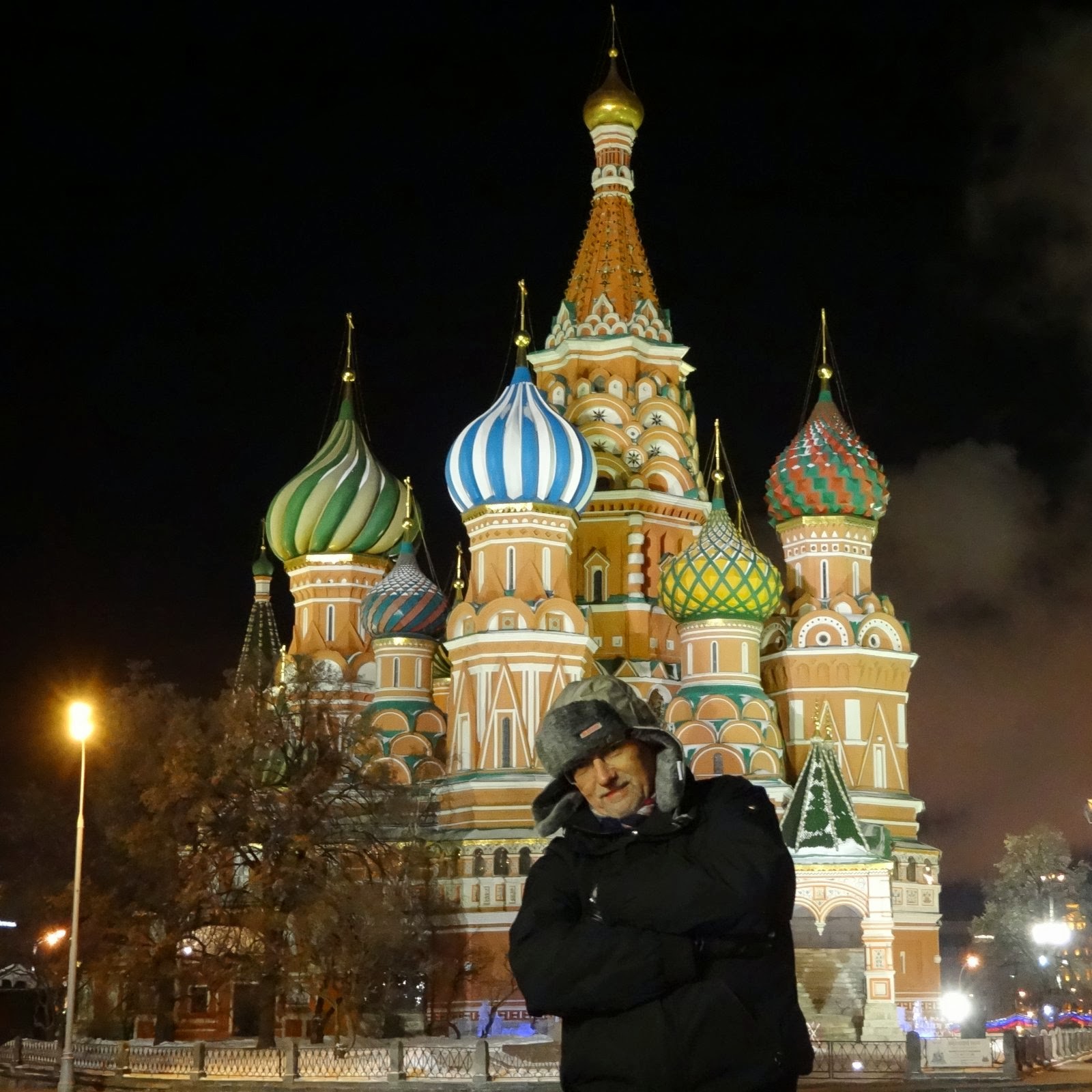 Business trip to Moscow. Freezing cold at the Kremlin: minus 23 Celcius.
Posted by Rene Fijten at 20:29 4 comments:

Email ThisBlogThis!Share to TwitterShare to FacebookShare to Pinterest
Labels: Russia 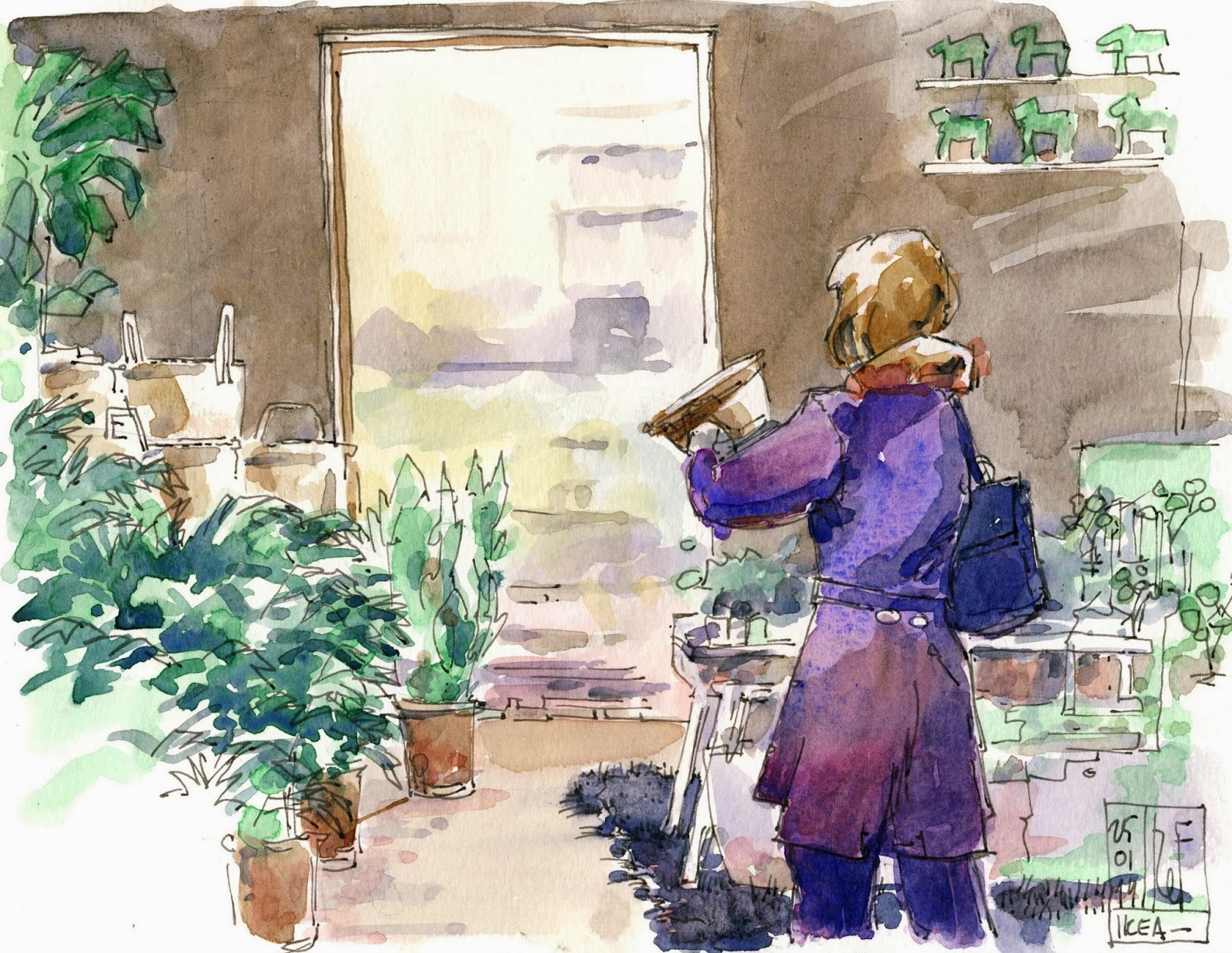 We had a great time with all the sketchers together.
This is one of the drawings that I made: the flower department.
I had sketched the dooropening and flowers in pencil, when a woman came along to study a vase. She did not stand still for long of course, but the few seconds were enough to get the gesture right (in pencil). Then another woman came around, with a similar coat, another hairdo and a scarf. I still missed something, but a third woman had a bag like this, and that finished the drawing. The rest was just filling the colours.
Posted by Rene Fijten at 20:59 3 comments: 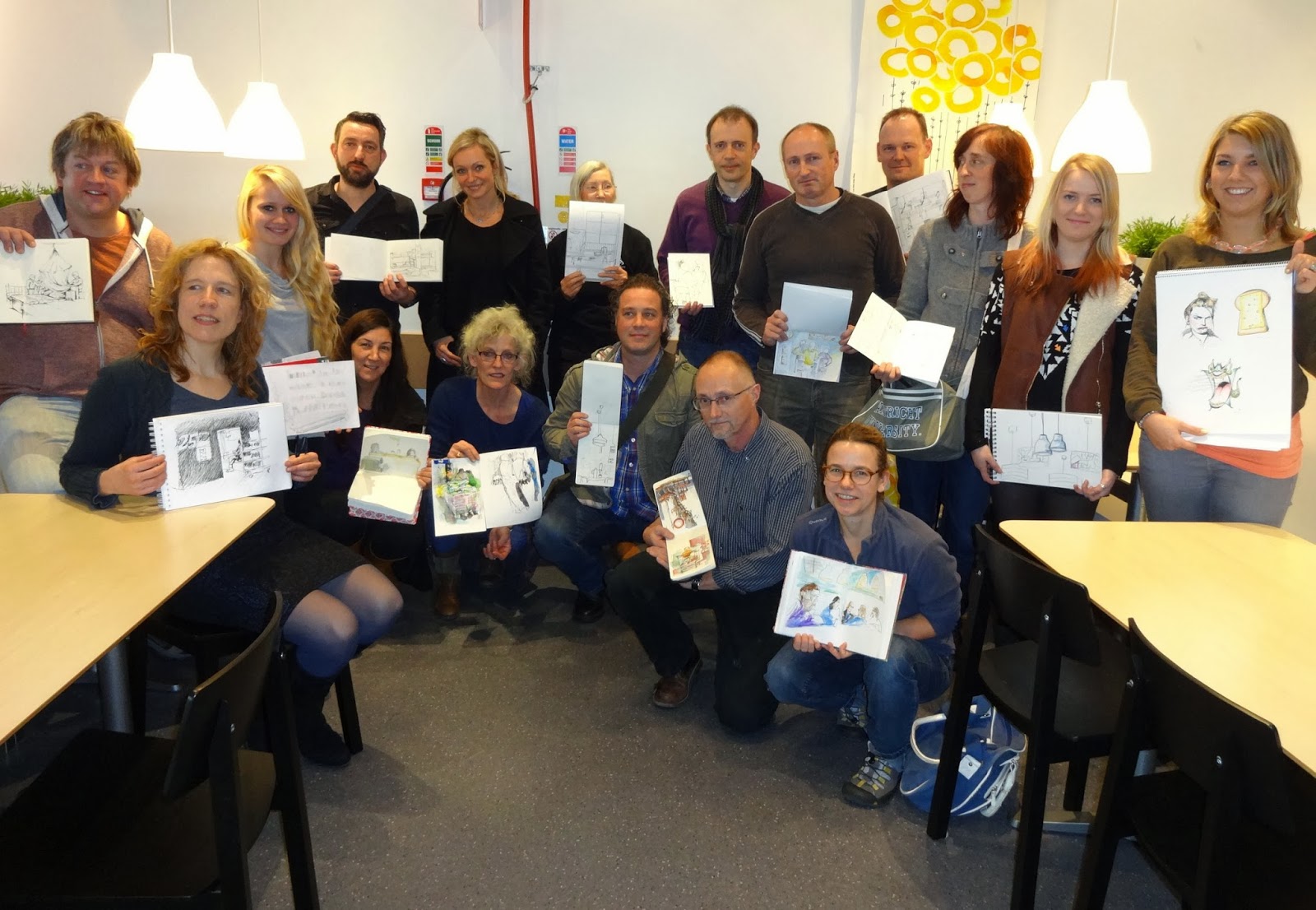 We had another great Sketchcrawl again, the 7th. Like last year at Ikea again; at least it's warm and dry there.  Even though it was very crowded today, there was a lot to sketch.
In total we were with 18 sketchers this time. It's always great to sketch together and learn from each others drawings.
Posted by Rene Fijten at 19:33 No comments:

Email ThisBlogThis!Share to TwitterShare to FacebookShare to Pinterest
Labels: Sketchcrawl 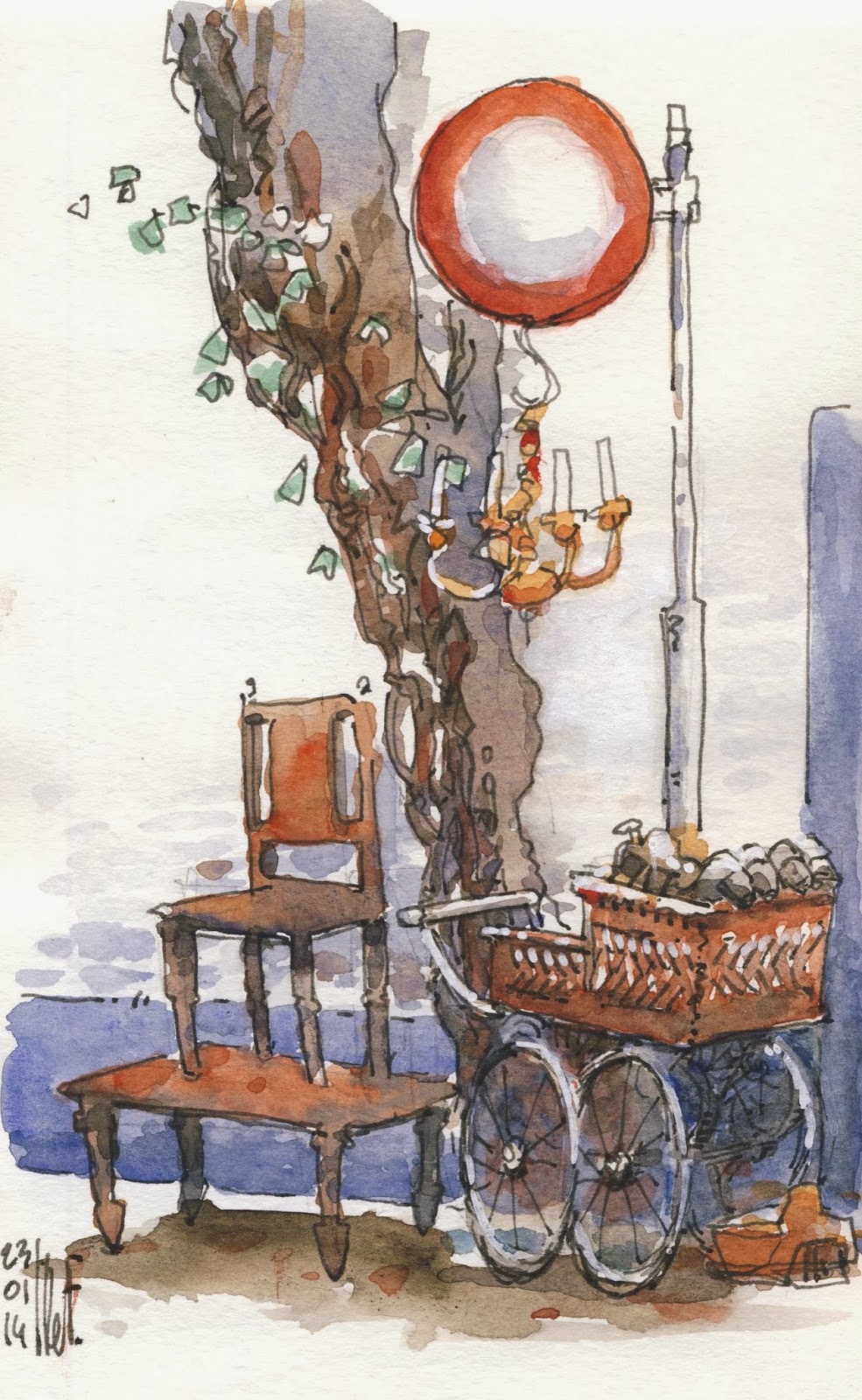 I was not happy with the earlier version, and I received some usefull ideas on what was wrong. So this afternoon during lunchbreak I went back and made a new version of the same curiosa shop in the Lantaarnstraat.
I think this one is already somewhat better.
Posted by Rene Fijten at 22:42 2 comments: 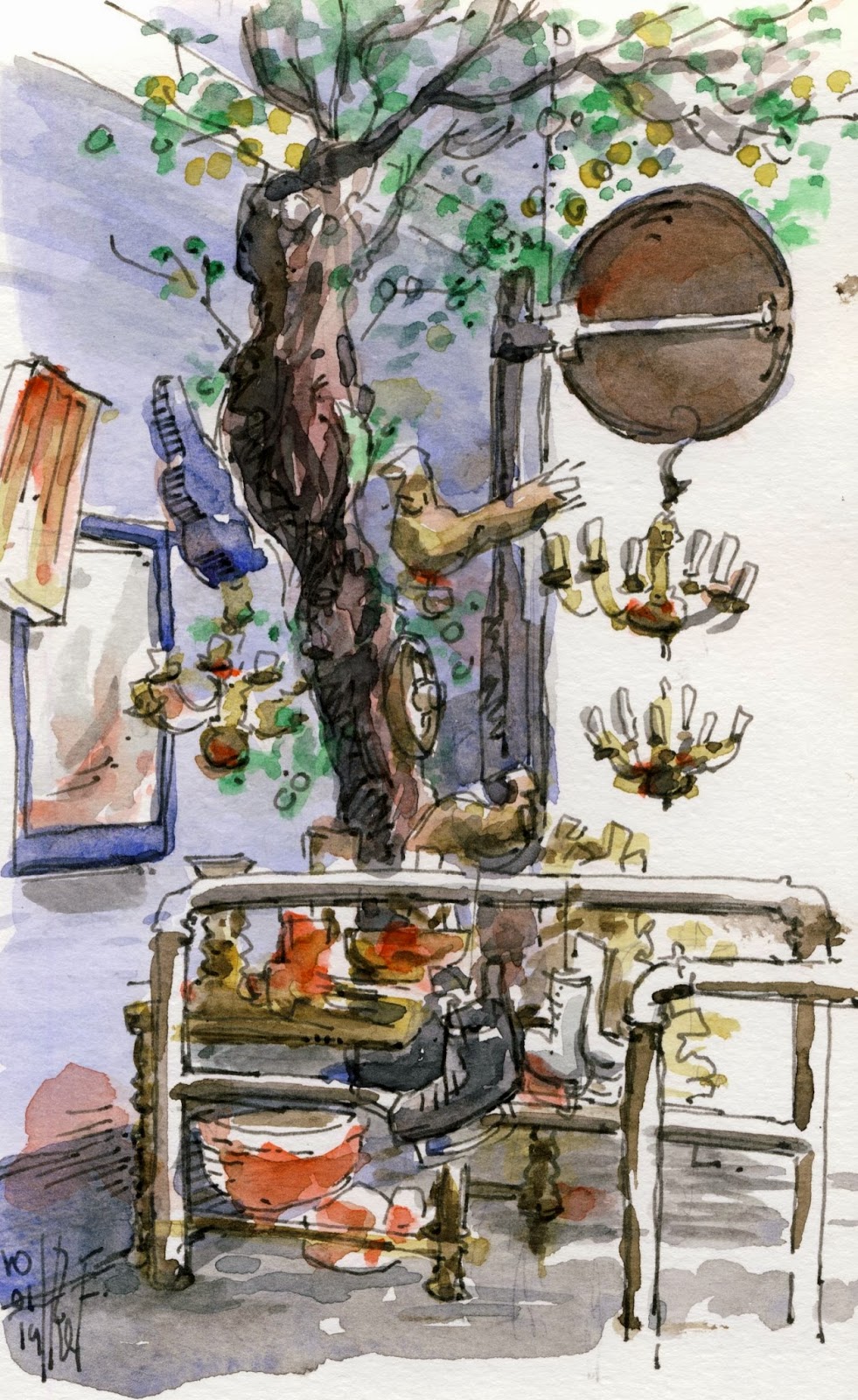 A sidestreet in the Maastricht centre, the Lantaarnstraat. There is a small shop selling all kind of antique and old stuff, called 't Winkelke Jo-Pie (I think).
Even in the midst of winter he has a lot of brocante on display on the outside. Always a joy to see. Time for a quick sketch during lunchbreak.

I was reluctant to post the sketch because I feel there is something wrong with this drawing. It doesn't work. But I just can't figure out what. 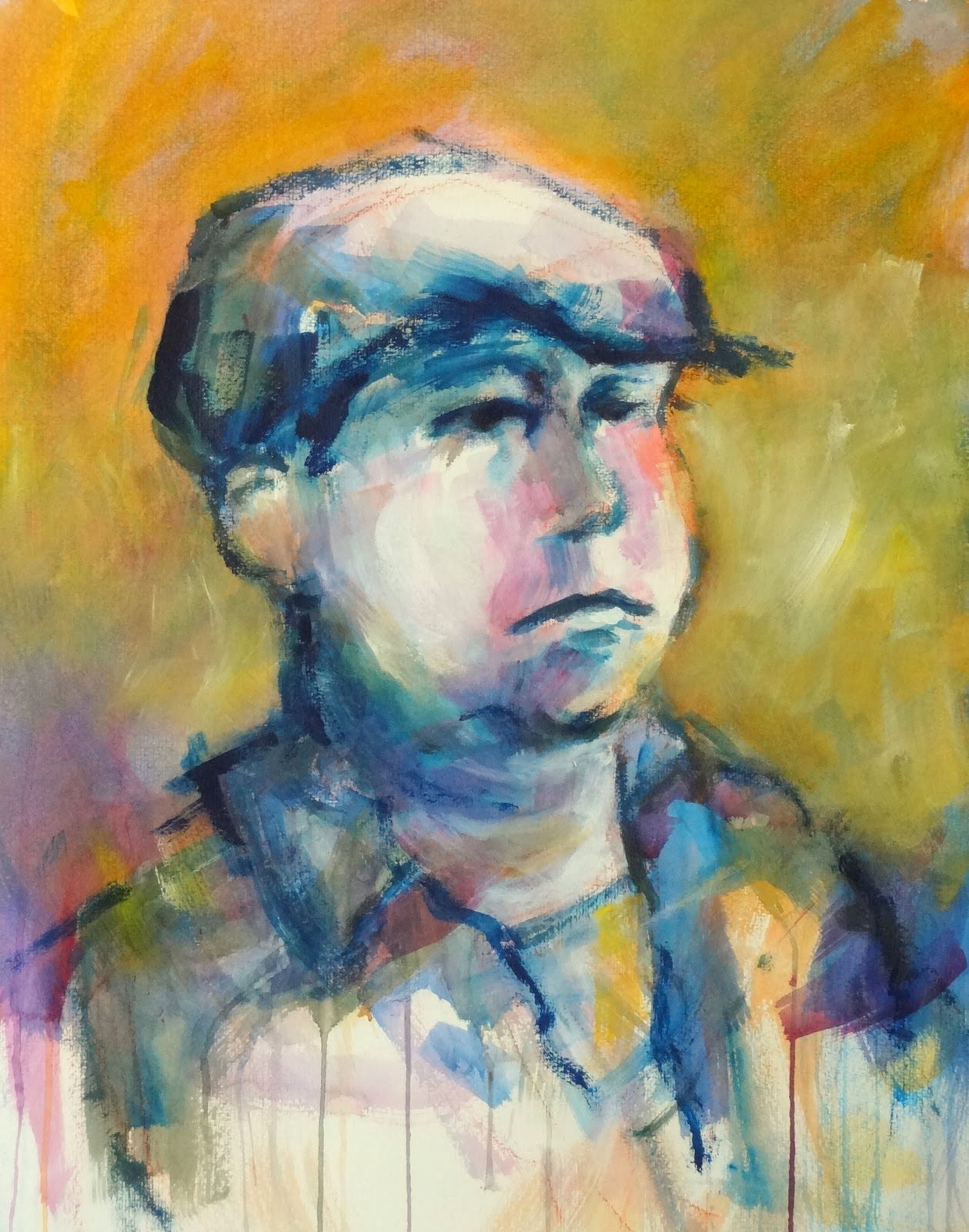 Portrait class with live model. 50x60cm, acryl. Took me about an hour to make.
Posted by Rene Fijten at 13:56 No comments: 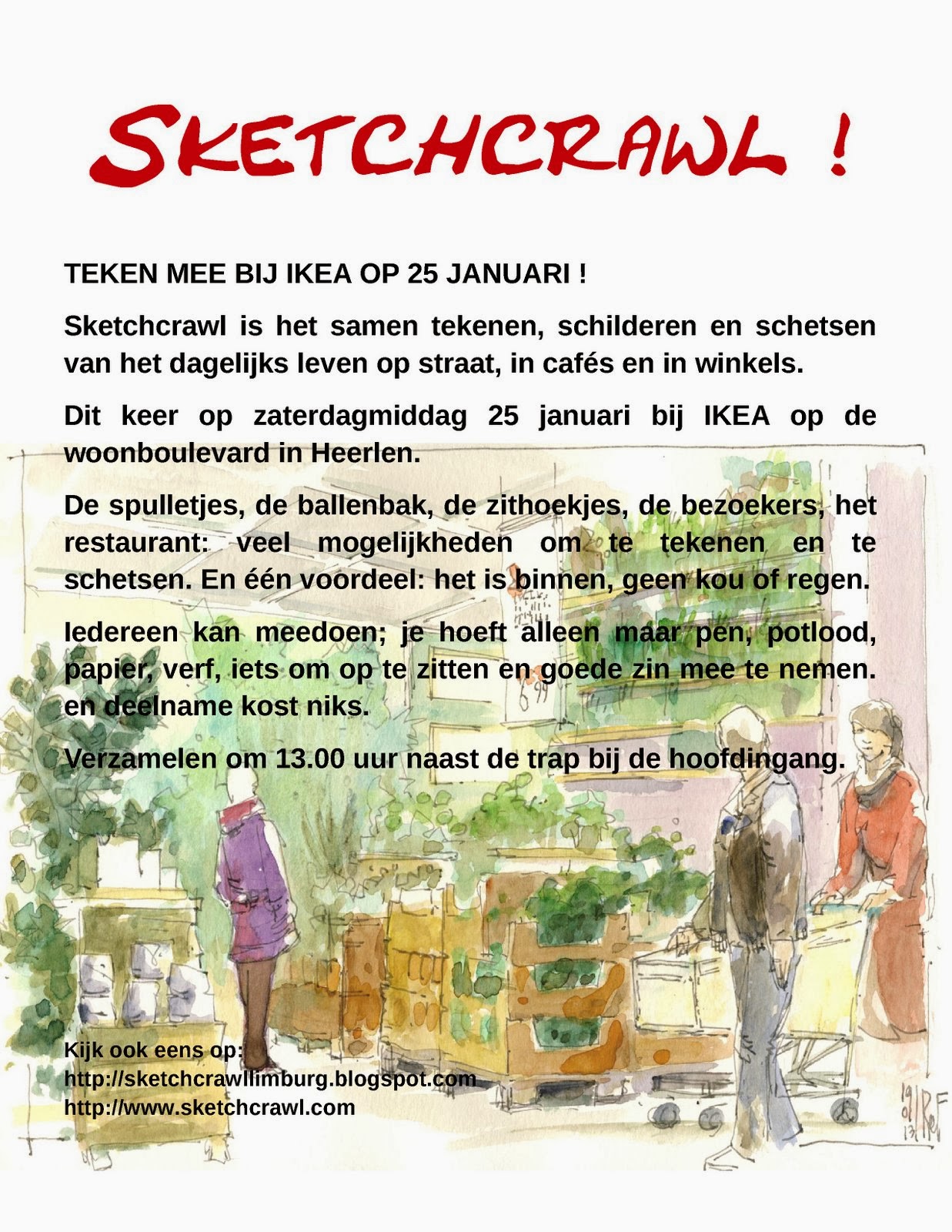 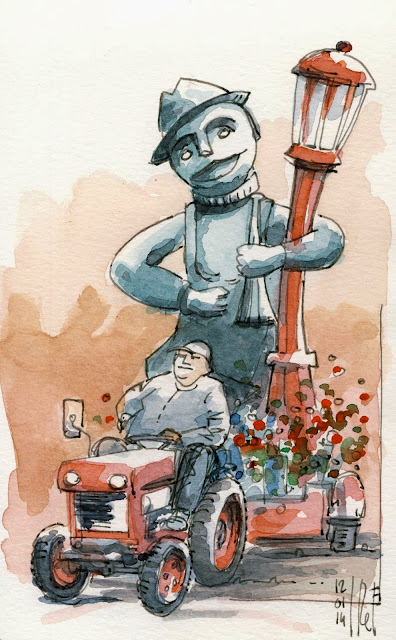 Carnaval season will start in a few weeks, and there are preparations going on everywhere.
I made this drawing as illustration for our local carnaval newspaper, d'r UUL (the owl, according tradition a symbol for carnaval).

This small statue is called the "Koekoewawa", and is referring to an old local song (in dialect): "Doe bes eine KOEKOEWAWA, zuug 'm doa 'ns sjtoan!" (freely translated as: you are a silly man, look at you standing there).
It's always the first float of the carnaval parade as long as I can remember, even back when I was a little child.
This scene is loosely based on a picture I made last year during the parade. 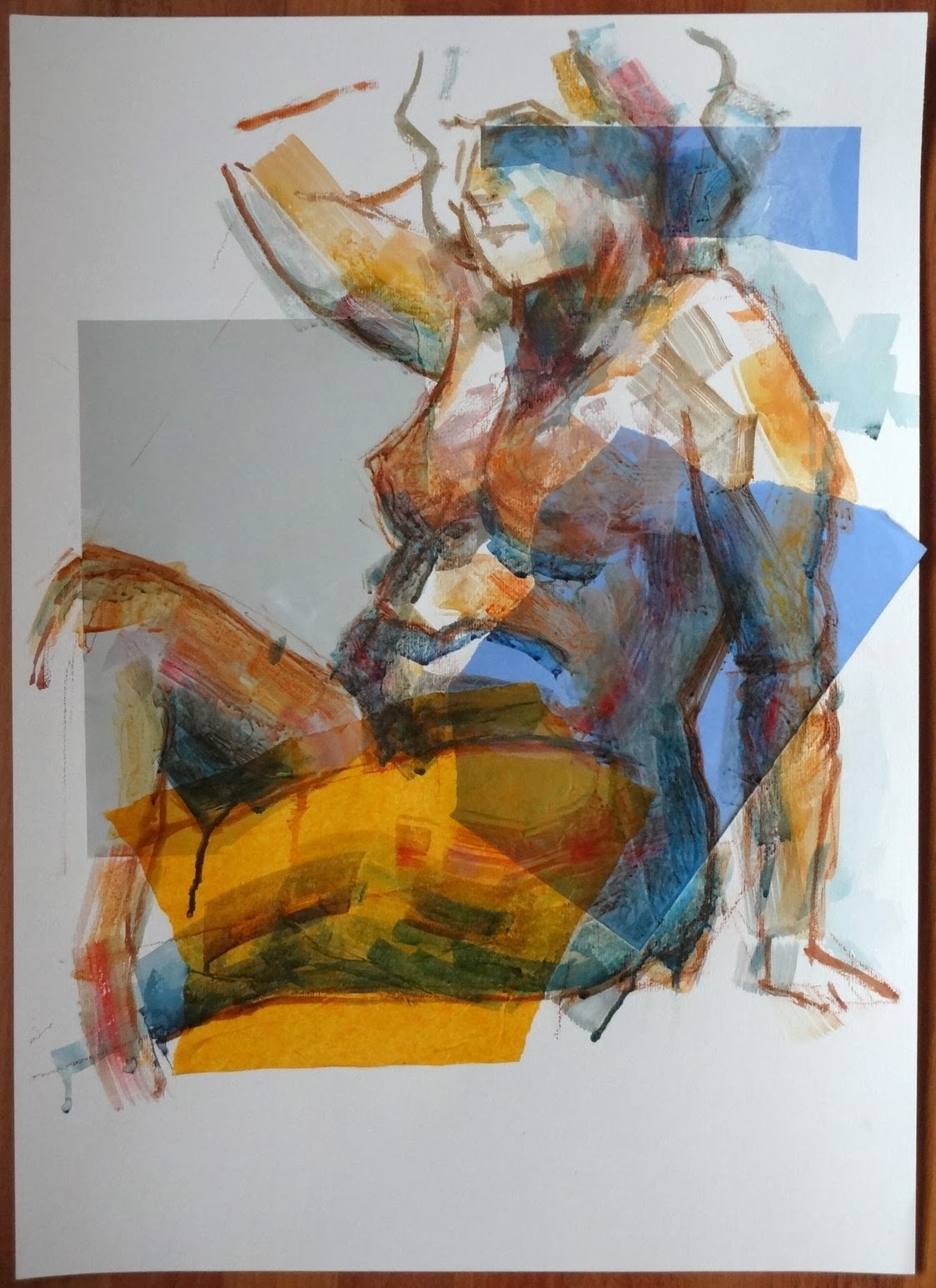 Live model class. This time our model was Julia, it's always a pleasure to paint her because she can sit through difficult poses for a long time.
The exercise was to glue coloured paper at random on a 50x60cm sheet. Then apply transparent layers of acrylic paint over it, finding back the model, but without losing the background. Below you see the early stages. This one took about 45 minutes to make.
The procedure looks quite effortless, but the second that I made was horrible. I consider myself rather lucky with this one. 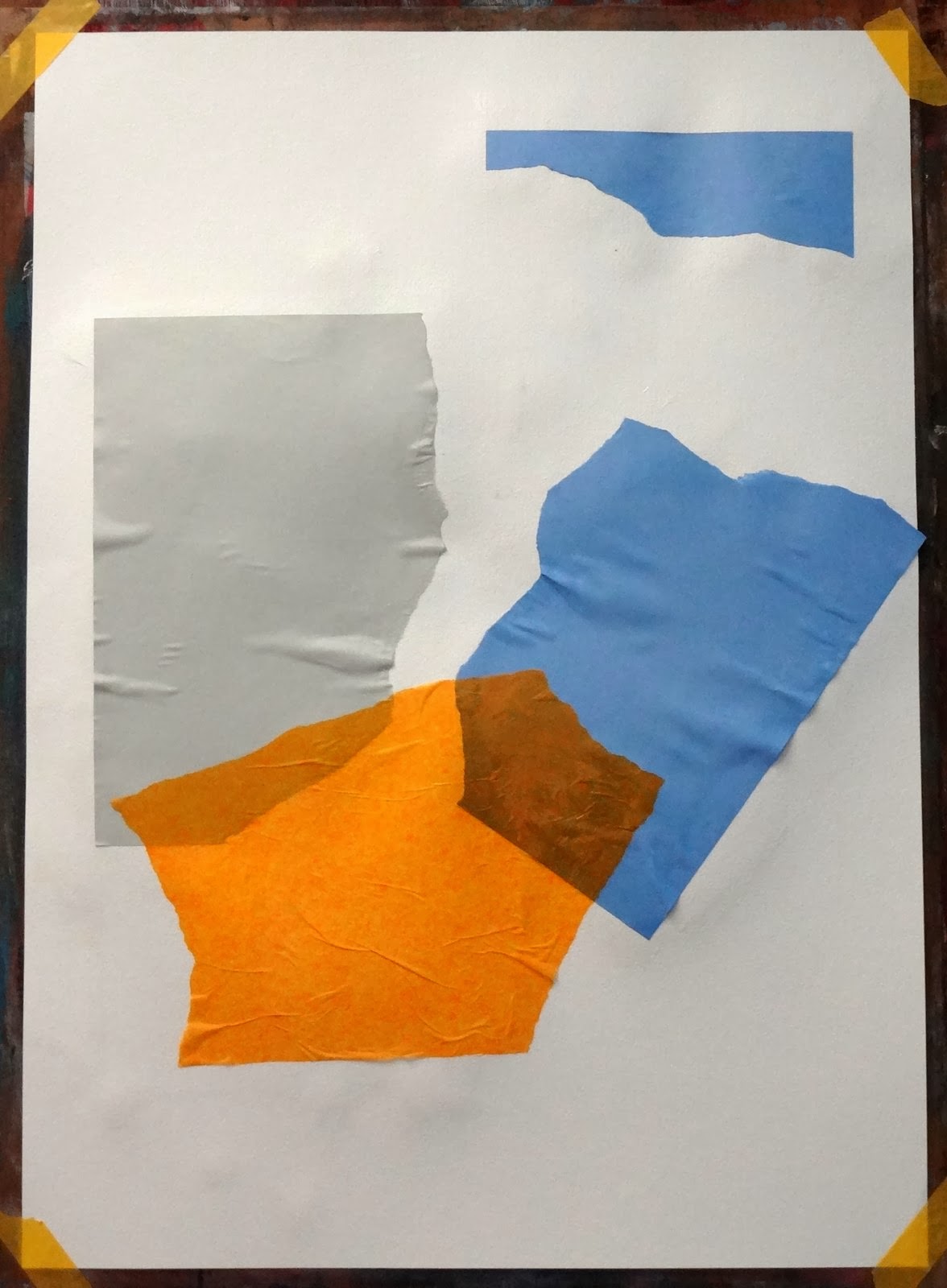 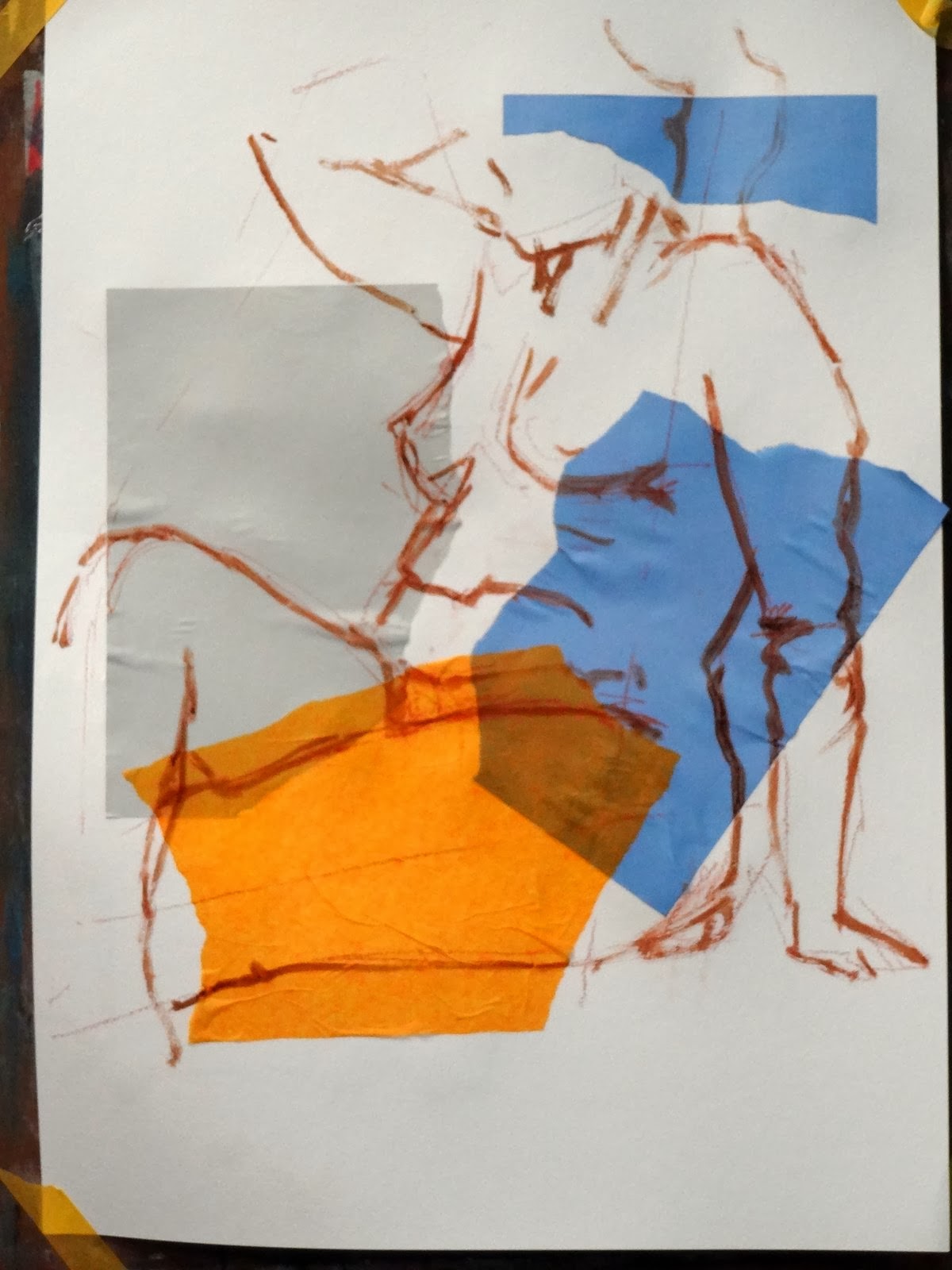 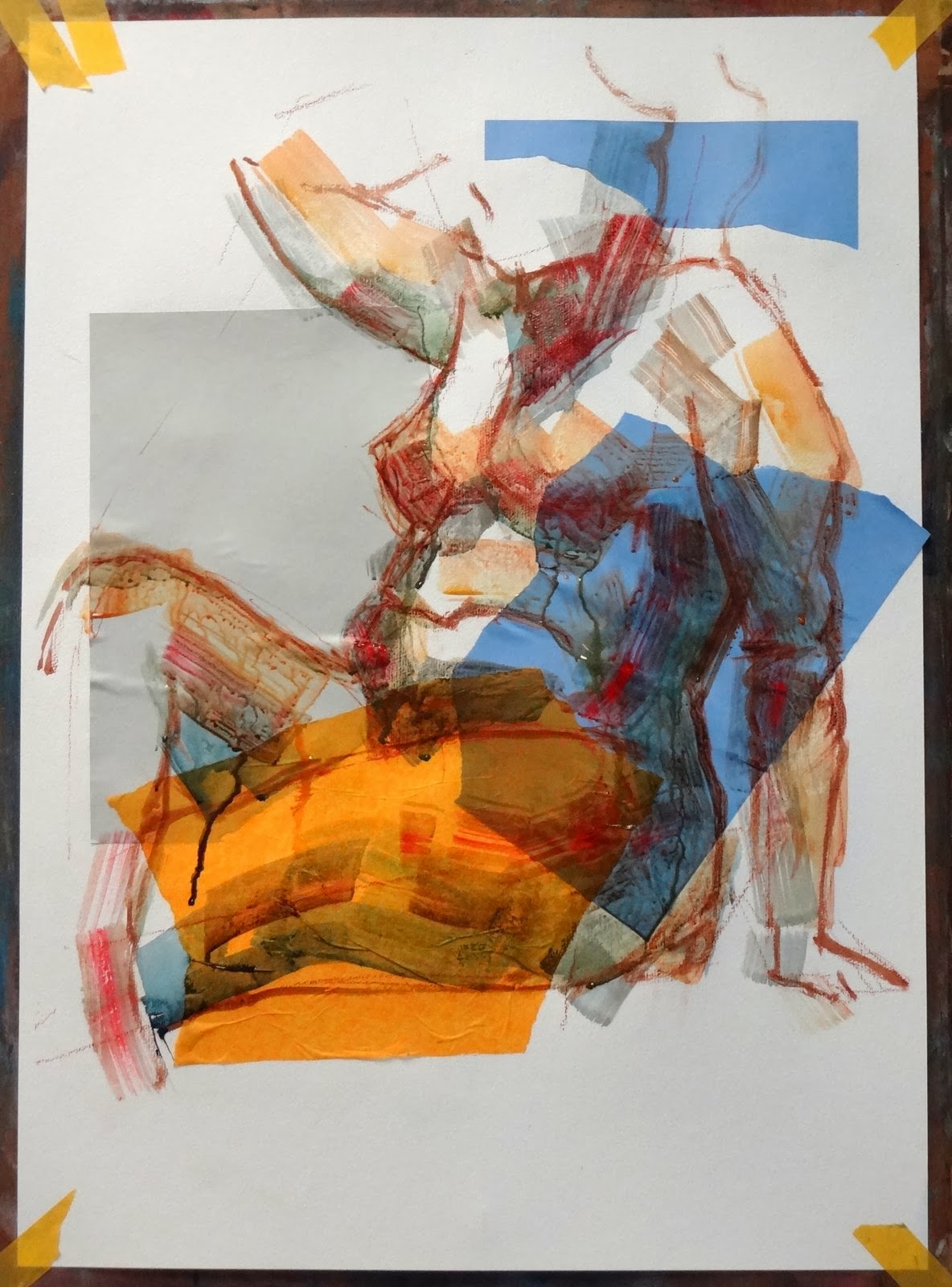 First: sticking the coloured paper.
Second: finding the contours with pastel and defining them with grey brown acrylic.
Third: blocking in the shadowed parts and light spots.
Fourth and final (top painting): adding details and painting the in between hues of colour.
Posted by Rene Fijten at 18:19 No comments: 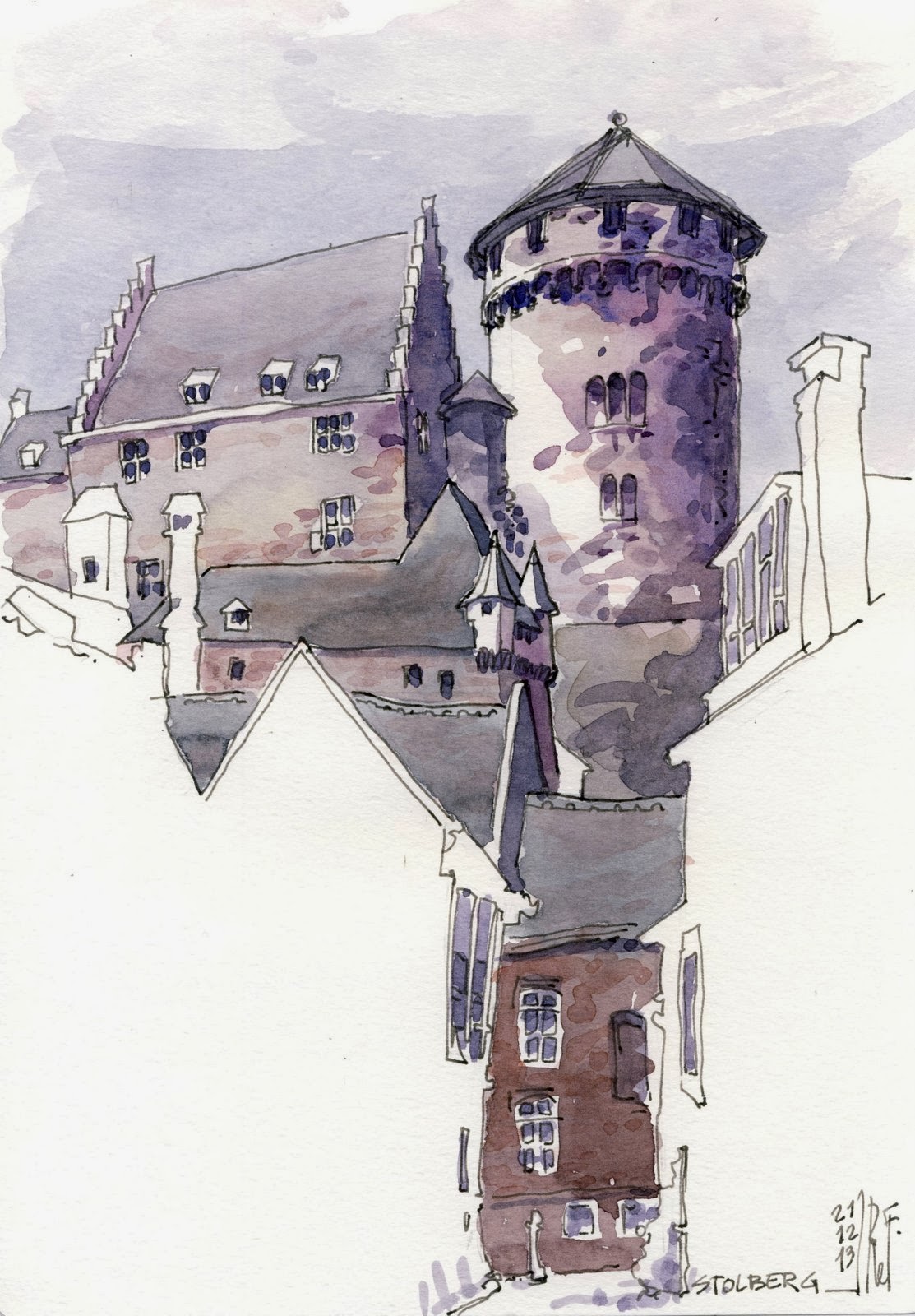 I still had a pencil and ink drawing left in my A4 Moleskine sketchbook. I made the sketch during my visit to Stolberg in December, but could not finish it because the dusk set in. I painted it yesterday. Originally I had planned to paint it in more detail, but I kind of liked the intermediate result so I left it this way.
This is the opposite view from the other Stolberg sketch (see a few posts back).
Posted by Rene Fijten at 22:40 4 comments: 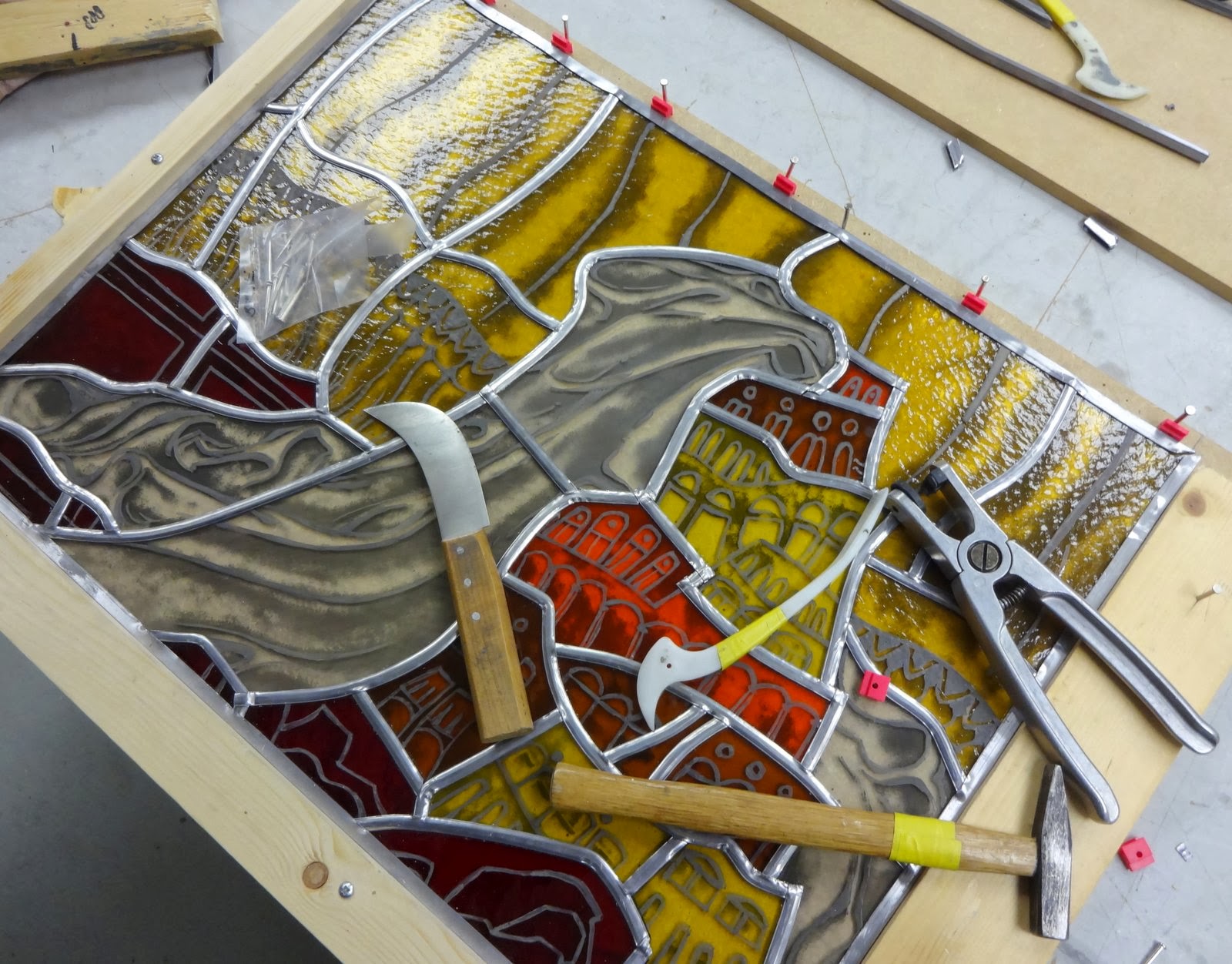 Working hard on my stained glass window again. Finished laying all the pieces in lead, next week soldering and fixing it in putty. I wonder how it will look like when the sun shines through it!
Posted by Rene Fijten at 23:13 No comments:

No right turn: The jewel 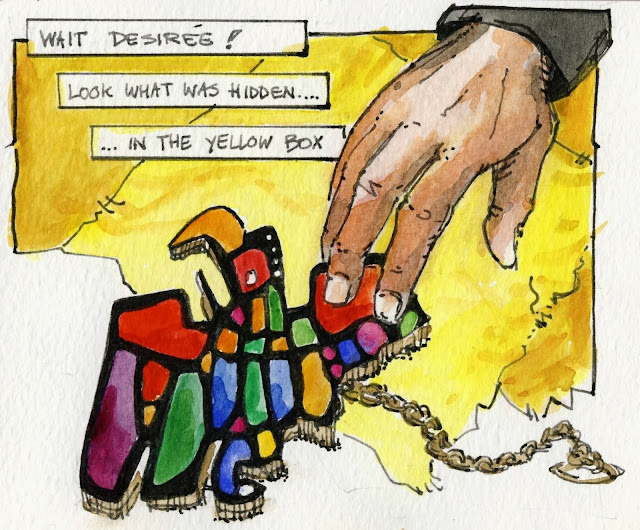 The final pane for Chapter 3 of our comic "No right turn". The secret revealed: an ancient jewel, which is broken. Leaves the quesion: where is the missing part, and what is the meaning of the jewel.
Posted by Rene Fijten at 11:37 No comments:

Email ThisBlogThis!Share to TwitterShare to FacebookShare to Pinterest
Labels: Comics, No Right Turn 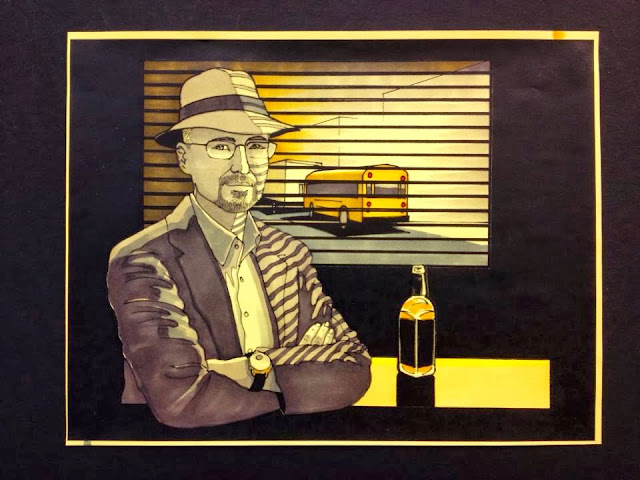 First: best wishes for the new year! May it be a creative one!
How about this surprise when opening my facebook account this morning: Wes Douglas (from Illinois,USA) made this fantastic portrait of me. I had no idea. How cool is this.
And so well made.
You already guessed that's a reference to the comic we are all working on: "no right turn".
I think that hat looks really cool, I'll have to buy one.
Thanks Wes!