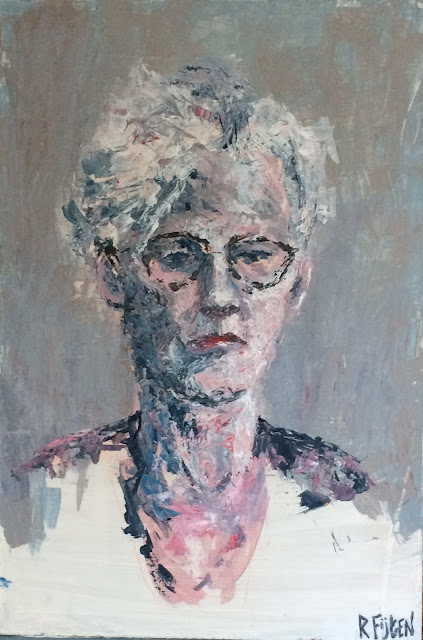 Last art/model class. This time of Annemiek herself. The model had a problem and could not show up, so Annemiek sat for us this time. Palette knifes and acrylic on wood; 40x60cm.
Posted by Rene Fijten at 21:51 No comments: 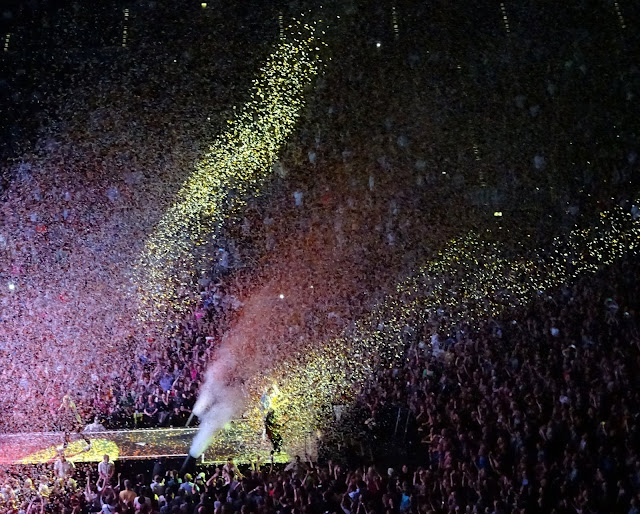 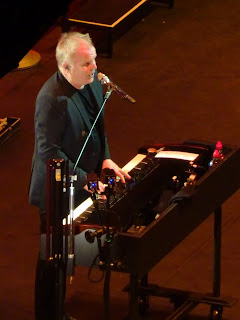 Herbert Groenemeyer, the popular German artist and songwriter, gave a stadium concert in Cologne.
We went there last Wednesday night. The Lanxess arena was sold out, and an enthousiastic crowd sang along on the top of their voices, along with his songs. Another fantastic show. I think it's the fifth time we attended to his performances, but so far we never had a let down.

Email ThisBlogThis!Share to TwitterShare to FacebookShare to Pinterest
Labels: Concert/music 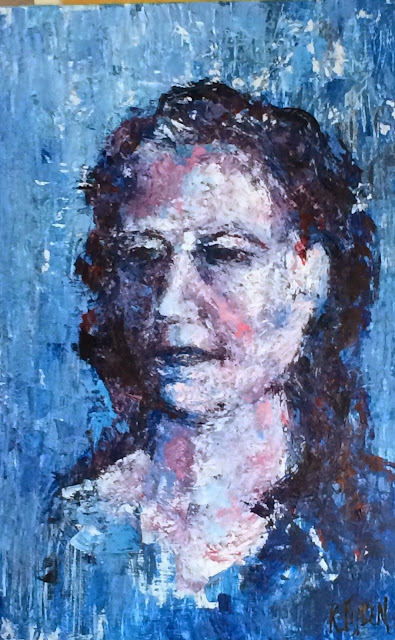 Very hard to do: painting by using a palette knife. Especially on a life portrait, this time of Eva.
I used a wooden base, which I had already used for a painting. Treated it with rough Gesso, andyou already have a textured underground. The rest was hard work. I deliberately restricted myself to 2 colours: Windsor blue and alizarin crimson. Plus titanium white and some Paines grey.
Acrylic on wood 42x62, took 2 hours in the atelier and about 1 hour post-production.
Posted by Rene Fijten at 19:17 No comments:

Maastricht, view from the bridge 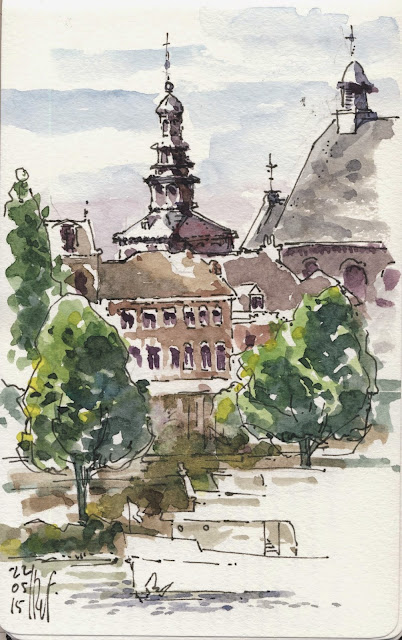 Maastricht, went for a walk during lunchtime today. The weather was really nice.
I took the time to make this quick sketch, from the St. Servaasbridge looking over the water towards the centre of town. The tower in the middle is our cityhall. Took about 20 minutes to draw and paint.
Posted by Rene Fijten at 20:52 No comments: 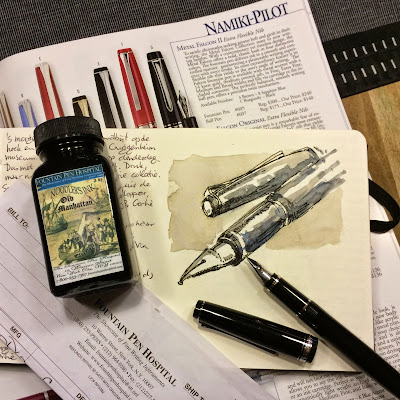 During our trip to New York I treated myself on a Pilot Falcon fountain pen. The one with the bird-beak shaped flexible nib.
In Europe you can only buy the very expensive metal one, but I found this address in New York Downtown, where I could try out the regular type. The issue was deciding on the size of the nib, which also depends on the type of paper. I bought the SF type: $144.
I hope it lives up to it's reputation.
First impressions: the nib is really flexible, but I have to get used to change pressure on the nib for maximum effect.
And I did notice that the lexington grey is more dark than what I am used to, probably because it feeds more ink than my Lamy. 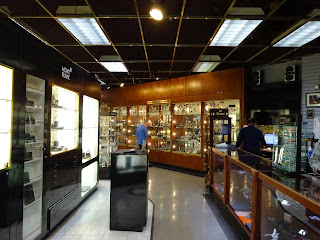 We bought the pen at the "Fountain pen hospital" on Warren street near City hall.
A beautiful shop with some 2000 types of fountain pens.
We were served well with really good advice, they took their time and I was able to try some different pens as well. That is something that buying on the internet will always lack: good personal advice.
And it will add to the value of the pen: the pen is now connected to memories of this trip to NYC for years to come.
Posted by Rene Fijten at 22:17 No comments: 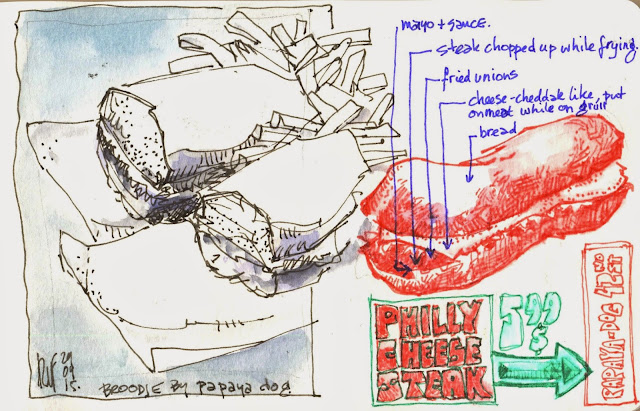 The last of my New York Sketches. I still have one unfinished, but sometimes you just loose interest and they stay unfinished. These sketches are a bit random: The above is about my new favourite streetfood: the Philly cheesesteak. I love it. Beats any burger I had so far (actually, there was a Shake Shack across the street from our hotel, seems to be something special considering the long queues blocking the pavement at lunchtime).
Below sketches I made during the performance of a Gospel choir in Harlem. Actually, it was the same choir that we visited 6 years ago: the ARC gospel choir. One of the singers was a fragile 90 year old man. He had to be supported during his performances, but what a feast it was. 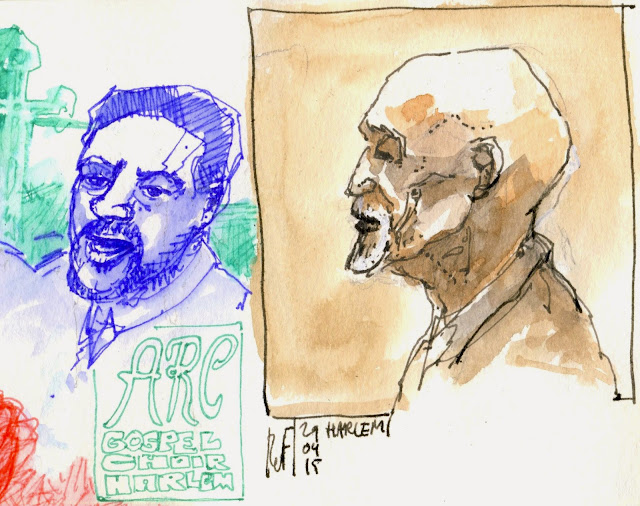 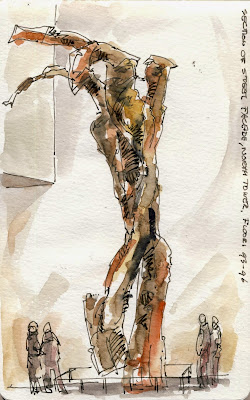 9/11. It was one of those moments when everyone knows for the rest of their lives where they were and what they were doing.
I was at the office when the first plane hit, and a little later at home as I watched in horror on live-TV how the twin towers came down in a storm of dust. My children still recount the look on my face.
We visited the former location of the WTC, the holes it left in the new square at the foot of the freedom tower, and the new museum. The museum was very well done: with a well dosed amount of respect, anger and documentation. And I should add, without the American patriotic sentimentality you sometimes see in exhibitions like these (in our cynical European eyes).
The above sketch is Ladder 3, the firetruck that was wrecked by the collapsing towers.
And the burned and bent remains of one of the steel columns of the facades. It makes you realise the magnitude of the forces during the events.
Well worthy a visit. But come early, before the crowds arrive.
Posted by Rene Fijten at 19:41 No comments: 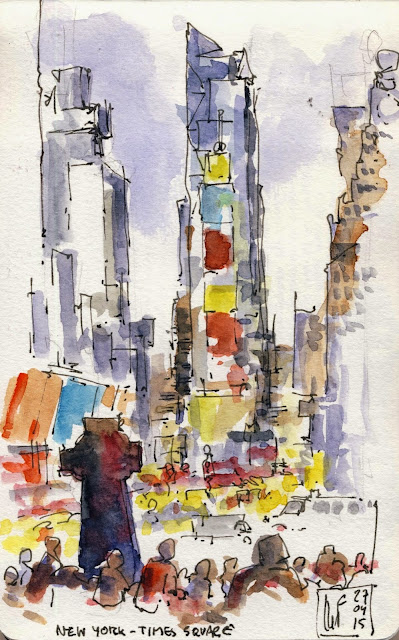 Our hotel was just one block from Times square, you could find us there every evening. On the north side there is a kind of stepped terrace, slowly rising, and tourists like us can sit there overlooking the crowd, sip on a starbucks "red eye", and admire the vibrant colours, the constant hustle on the streets and the ever changing billboards. And look at the New Yorkers below, how they try to make a buck out of the tourists. And how the tourists fall for every trick in the book.
Posted by Rene Fijten at 22:20 No comments: 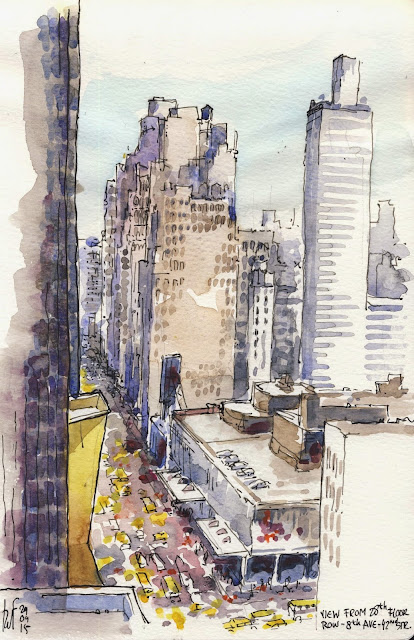 Like I said in the previous post: we had a corner room. Looking to the west it was Hells kitchen towrds the Hudson, the south window had this fabulous view. Over 8th avenue, looking downtown. 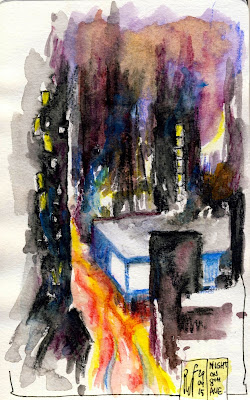 I also tried a night drawing, but that was practically impossible, how can you catch the shimmering lights and streams of yellow cabs in the canyons below?
Here is my try anyway. Made wth Faber Castell watercolour pencils.
Posted by Rene Fijten at 19:46 No comments: 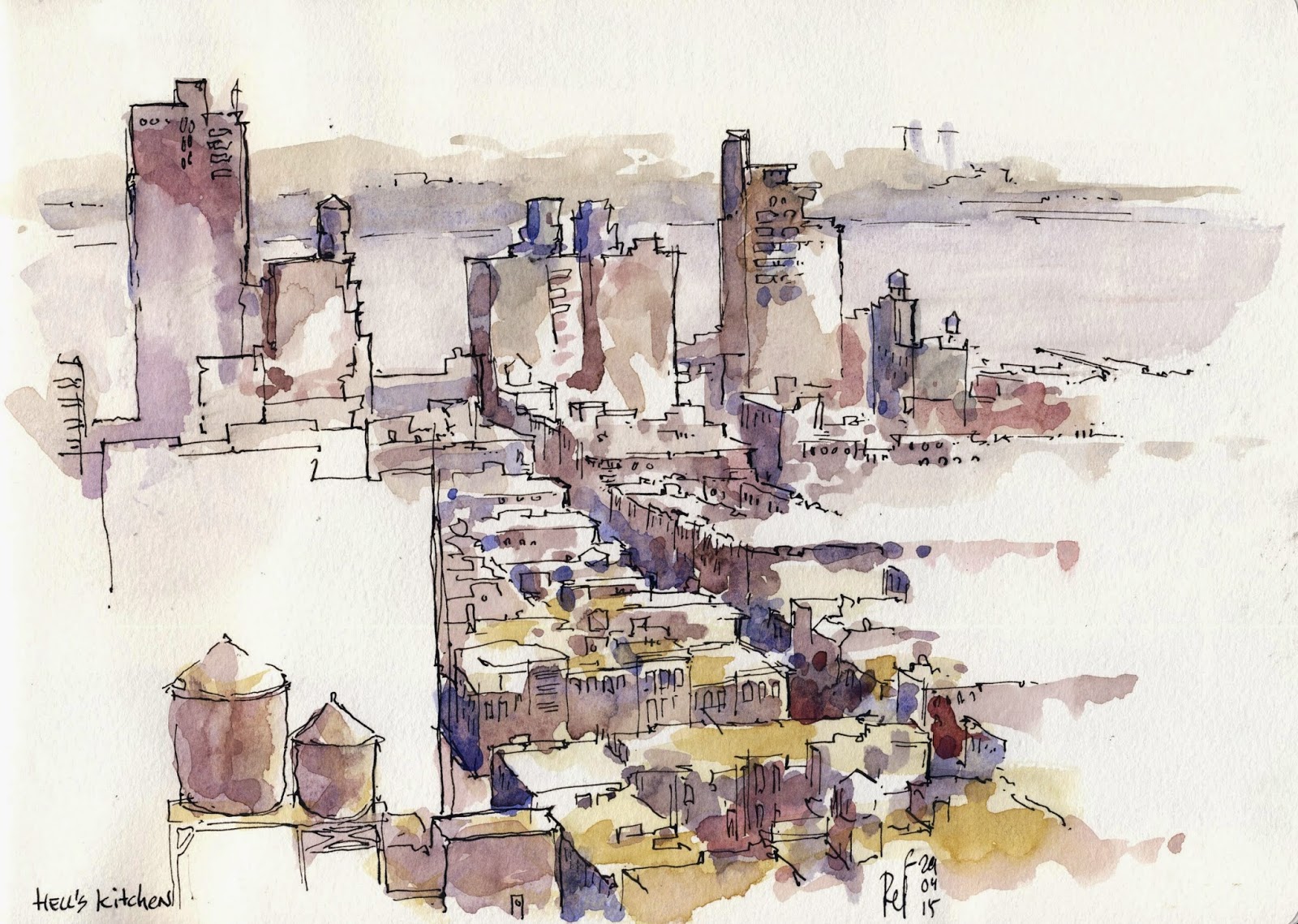 At the check in of our hotel - the ROW hotel on 8th avenue, just a block away from Times square - I mentioned that I sometimes draw the view from my hotel room windows. It could be coincidence, but we got a corner room at the top of the hotel: the 28th. floor. With a breathtaking view to the west over Hell's kitchen towards the Hudson, and an equally breathtaking view along 8th avenue towards the south. 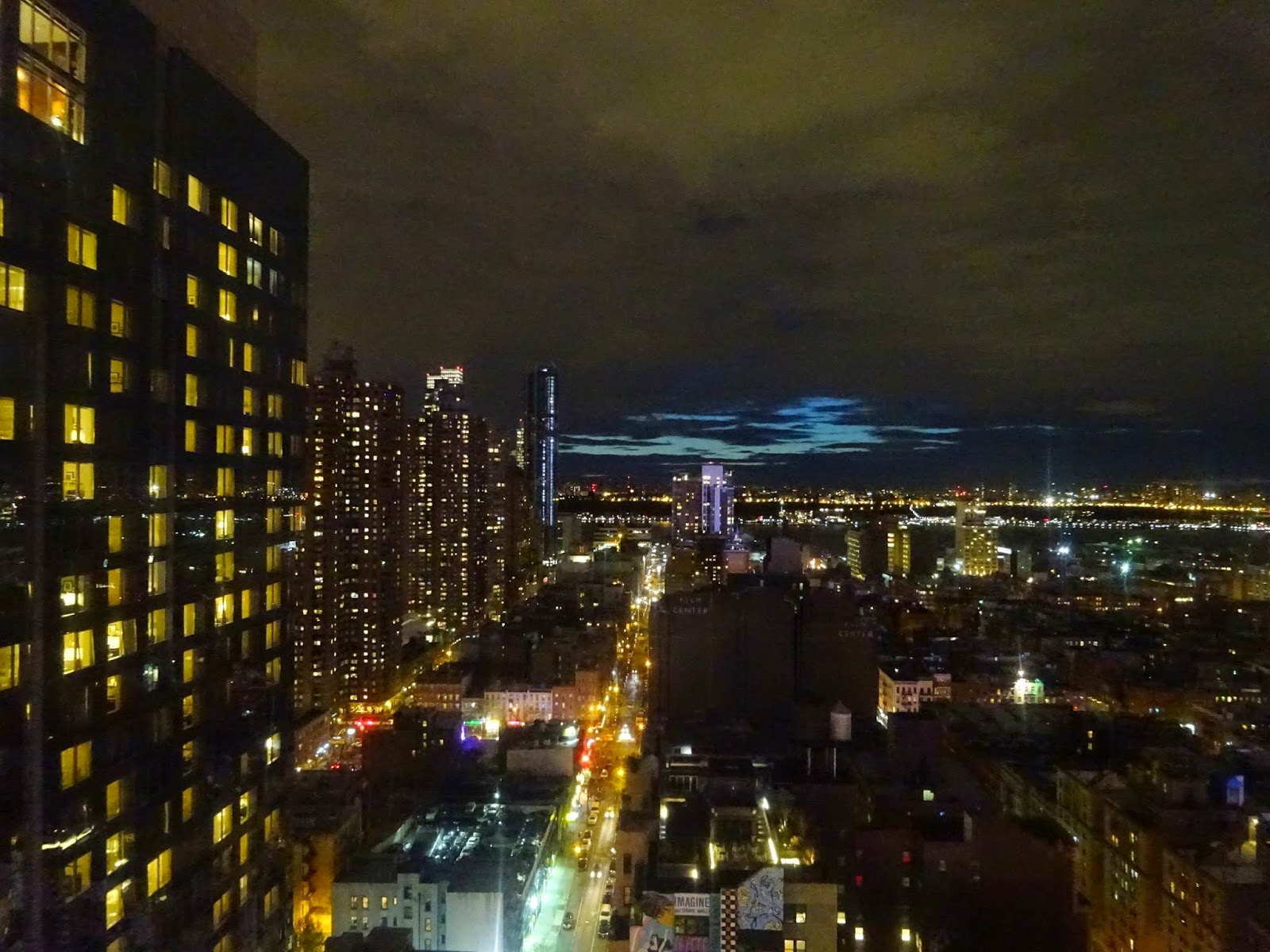 There was a disadvantage though. It was the smallest hotel bedroom that we ever had in the States. We had trouble putting our suitcase somewhere. But it was freshly decorated, clean, well kept and had good sanitary provisions. And with a perfect location and a perfect view, what more can you wish for.
Posted by Rene Fijten at 23:00 No comments: 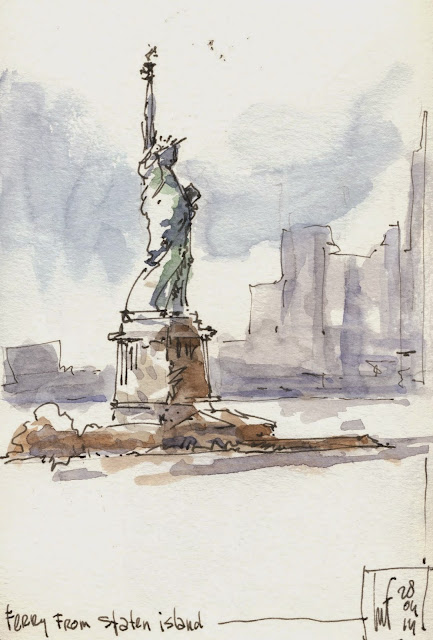 Statue of liberty, as seen from the Staten Island ferry. Still one of the cheapest New York attractions.
Unfortunately we did not have a ferry with an open deck this time (like we had 6 years ago), but we had to watch Manhattan, Ellis island and the Statue from behind windows. 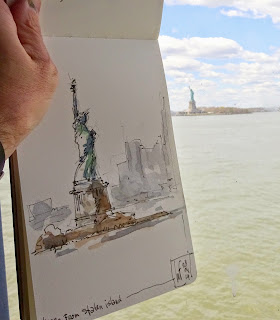 I had about 7-9 minutes to draw and paint this, the ferry is already halfway it's 25 minute journey before you see the statue properly. Sometimes drawing so quickly works, because you have to skip details. But more often it's off mark.
Posted by Rene Fijten at 17:31 2 comments: 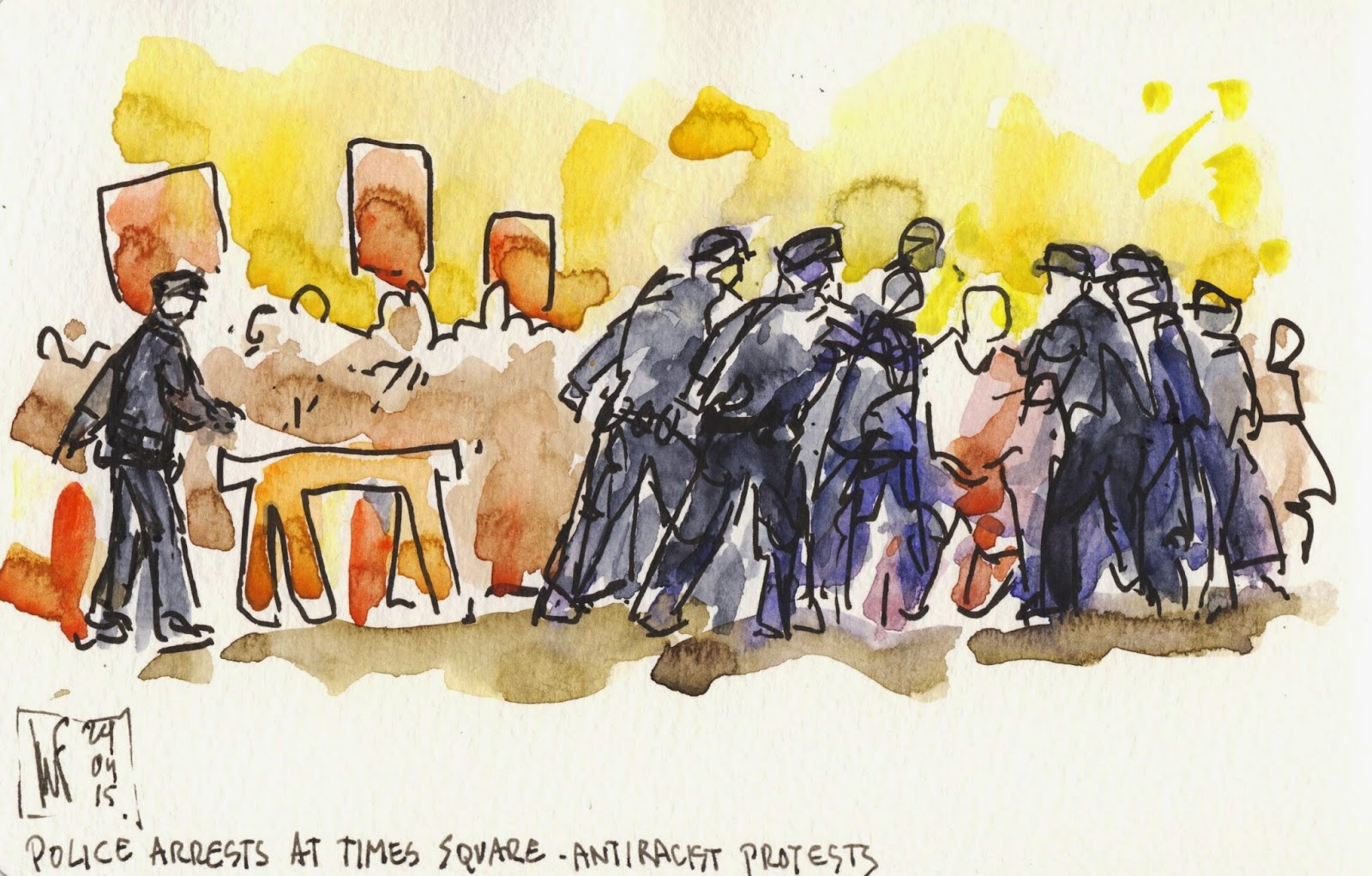 We just returned from a few nice days in New York.
Before I show the usual drawings I made: here is a newsflash. A few drawings I made last wednesday on Time Square related to the protests in support of the demonstrations on the death of Freddy Gray in Baltimore.
That wednesday night we were returning from dinner on 49th street when we heard helicopters overhead. A few minutes later some 20 police vans appeared, spilling out policemen and blocking 9th ave. The protesters came from Times square, maybe 200 persons, marching on the sidewalks and crossing the avenue. They did not seem to know where to go, because they walked into the direction of Hells kitchen, but suddenly returned and came back to 9th ave, only to take the turn downtown towards PABS.
It was a bit awkward to see that the sidewalk terraces of the restaurants had business as usual, people were just eating dinner. But we also noted that the liquor and electrical stores were closed and had police protection in front of the doors.
We saw 2 arrests just before our nose, quite an uneasy experience. 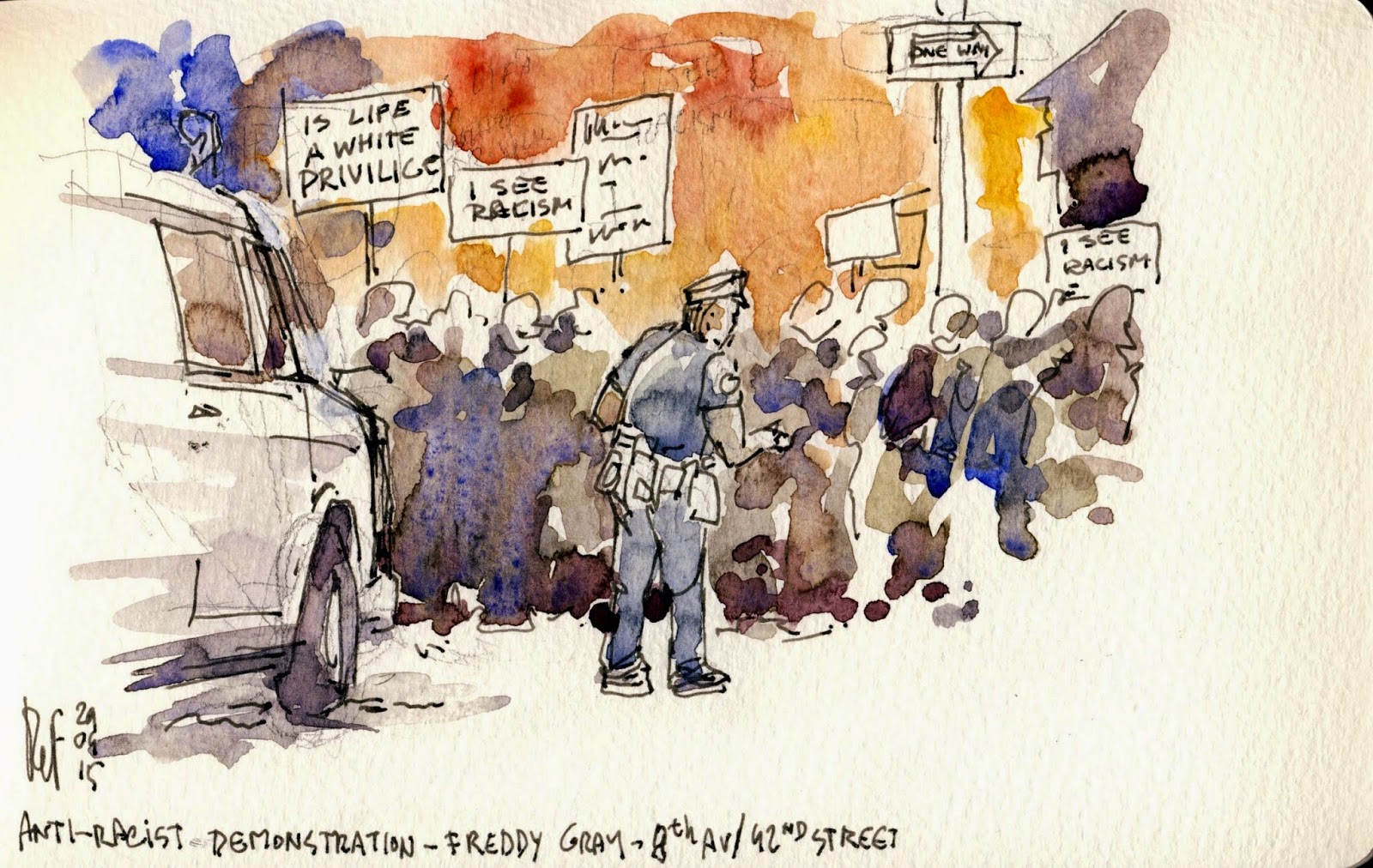 We walked to Times square (our hotel was on 8th ave and 42nd, just a block away). On Times square a large group of protesters stood shouting and showing signs. A large group of police officers stood near by to try and redirect the traffic and keep tourists out of the way. At some point some protesters blocked the road (I could not see if that was on purpose), and some 10 officers jumped on a protester and carried him away. It was over so quick I could only draw with the tools I had at hand.
The atmosphere was changing quickly, and an angry young black man started to talk to us to try to explain. We decided to return to our hotel. We heard the sirens and helicopters until late that night.
Posted by Rene Fijten at 13:11 No comments: